Ikue Ōtani
Announced at E3 2001, Pikachu (ピカチュウ, Pikachū) is a Pokémon and starter character in Super Smash Bros. Melee. Like Kirby and Ness, Pikachu was nerfed from the original to Melee.

Pikachu is currently 9th on the tier list because it is one of the better edge-guarders in the game, and on top of that it has good recovery and reliable finishers as well as a decent projectile. This results in Pikachu being an C tier. Having said that, it also has somewhat mediocre range in some non-electrical based attacks, and it is relatively easy to combo. 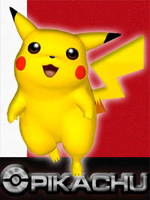 Pikachu is a small, light character with medium falling speed. It is also gifted with very quick speed and a very long and versatile recovery. Pikachu also has good upwards KO options including a fast, immensely powerful Up Smash (even more powerful than Fox's) and an Up Aerial that can semi-spike and KO characters at low percents. Pikachu also has a decent ground-hugging projectile (which means it can't be avoided by ducking) that can be used to setup approaches, but it still has limited approach. Pikachu has a few chain grabs that work on fast fallers, and its Down Throw is a reliable setup for a finishing move.

Pikachu's weakness lies in its range. Its grab and shield are the smallest in the game, and most of its attacks have low range. This hurts Pikachu in some areas, including approach and comboing, but in the end, pros should keep to the better side of its overall game.

Given that Pikachu was considered to be the best character in Smash 64 due to being ranked 1st in the tier list, as well as having numerous advantages that made it so, when making to the transition to Melee, Pikachu was generally nerfed, similar to Ness and Kirby but its nerfs weren't as severe as theirs. Unlike the two, however, Pikachu still remains a viable competitive fighting force. Pikachu's overwhelming advantages from the previous game such as its huge range of its attacks that helps it to combo were weakened, but it was buffed in grab game and its attacks are more powerful, helping it to keep its ground at the 9th position on the tier list.

Note: According to the debug menu in Melee, Pikachu technically doesn't contain any idle poses. Instead, it will perform both its idle poses in one loop (mostly noticeable when Pikachu is currently holding an item). Both these animations become Pikachu's idle poses in future Smash Bros. installments.

In addition to the normal trophy about Pikachu as a character, there are two trophies about it as a fighter, unlocked by completing the Adventure and All-Star modes respectively with Pikachu on any difficulty.

Pikachu
It's safe to say that Pikachu is the most famous and popular of all Pokémon. It has electric pouches in both cheeks; when in danger, it shoots electricity at its enemies. Although Pikachu can evolve into Raichu by exposure to a Thunderstone, many trainers like Pikachu so much that they don't let it evolve.

Pikachu (Smash Red):
While its electrical attacks, such as Thunder Jolt and Thunder, are powerful, Pikachu is at its best speeding around the fray and waiting for its chance to strike. You can control the path of Pikachu's two-directional Quick Attack, allowing you to jump twice. Hold down the B Button to charge up Skull Bash.