Ikue Ōtani
Pikachu (ピカチュウ, Pikachū?) is a fictional creature in the Pokémon franchise of media. It is one of the most popular and well known Pokémon in the world, and is the main representative of the franchise. It appears as a playable fighter in all five Super Smash Bros. games.

Pikachu is a small mouse-like Pokémon with short, yellow fur (with brown markings on the back), pointy, black-tipped ears, red circles on its cheeks, and a tail in the shape of a lightning bolt.

In the main series of video games, Pikachu is a relatively strong Electric-type Pokémon that can be found early in the original game. Unlike certain special monsters that had plot elements wrapped around them (such as Mewtwo), Pikachu was just another Pokémon that could be caught, evolved into its higher form, Raichu, and had no bearing on the story.

However, Pikachu's popularity in the anime, where it was the first and primary Pokémon of the main character, Ash Ketchum, eventually led to its starring its own specialized version of the Game Boy game (the Pokémon Yellow version, which was largely based on the anime), as the first Pokémon that the player obtained. Pikachu's role in the game was intensely elaborated on, as several events on the game depended on how Pikachu felt towards the player. Depending on the player's actions towards Pikachu, the electric mouse Pokémon would exhibit a variety of emotions when spoken to, varying from frustration, to amusement, to complete adoration. Pikachu's happiness was sometimes a prerequisite for certain rewards in the game, such as attaining the three Pokémon that could be chosen as starters from the Red and Blue versions.

Pikachu has not had a starring role in any of the main games in the series since then, but it has been featured in every prominent handheld RPG since the franchise, usually bringing something new with it each time. In Pokémon GS, released for the Game Boy Color in 2000, Pikachu gained a new evolutionary phase in the form of Pichu. It also gained an item called the Light Ball, which doubled Pikachu's Special Attack when held. However, the item was only obtainable when trading a Pikachu over from the Yellow version. The Emerald version of Pokémon Advance gave Pikachu an Egg Move exclusive to it and its family, called Volt Tackle, which was an exceptionally powerful Electric-attack with a large recoil. The Diamond and Pearl versions of the recently released DS title introduced cosmetic differences between genders for certain species of Pokémon, and Pikachu was one of them, with the females having a heart-shaped indent at the end of their tail. The Light Ball also gained a new feature in this game - allowing both Pikachu's Physical and Special Attacks to be doubled.

Pikachu has also been in virtually every Pokémon-related spin-off game ever released, sometimes as the star or the main character, and other times just featured among the hundreds of other Pokémon in the series. Notable Pikachu-centric games include Hey You, Pikachu! for the Nintendo 64, where the player could talk to Pikachu using the microphone, Pokémon Channel, which is usually regarded as a spiritual sequel to the previous title, PokePark Wii: Pikachu's Great Adventure which has Pikachu as the main character and in the Pokémon Mystery Dungeon games, where Pikachu is one of 16 Pokémon that the player can start out as. Pikachu has also been made into a Tamagotchi-style virtual pet called the Pocket Pikachu, which was a little LCD device that owners can clip onto their belt. Whenever the user took a step, it would register on the system, which would give Pikachu points in the form of "watts". It is described as quadrupedal. Pikachu is also the only character with an even matchup against Meta Knight.

Pikachu is an Electric-Type Pokémon with various electrical abilities. The two red spots on its cheeks are used for storing electricity. Pikachu uses them both for storing electricity as well as using them to discharge electricity onto its enemies. Pikachu can absorb electricity to a certain extent in order to raise its own electrical levels and will even give it extra energy to battle, but too much electricity can make Pikachu ill and even cause it to discharge electricity at random intervals which can harm itself and others around it. The tail can be used by Pikachu as a lightning rod to attract any electrical attacks and neutralize them. The tail can also be used for communication as Pikachu will rub tails with other Pikachu to share electricity and "talk" to each other.

As it is an Electric-Type Pokémon, it is extremely fast and can easily outspeed many other Pokémon, even Raichu, its evolved form. Pikachu can also use several other attacks not involving electricity such as Quick Attack (which is an always go-first attack), Skull Bash, and Iron Tail, a Steel-type attack where Pikachu attacks with his/her tail and can cut through most things. Volt Tackle is Pikachu's signature attack where Pikachu charges at an opponent while surrounding itself with high voltage electricity that causes massive damage. However, this will cause recoil damage on Pikachu (not in Super Smash Bros., only in the Pokémon RPGs). Pikachu also has a signature item called a Light Ball that will dramatically increase their offence stats (Attack and Special Attack) when held in battle. Pikachu are rare Pokémon and are mainly found in forests in the wild (such as Viridian Forest in the Kanto region) but they do enjoy living near power plants and cities as they give off high amounts of electricity for groups of Pikachu to feed off of and be able to use it for their own benefits, mainly for a battle.

Unfortunately, Pikachu sacrifices defence for speed and power. It has low defence levels and a couple of hits will knock it out fairly quickly. Pikachu also doesn't stand much chance against Ground-type Pokémon as they are immune to Electric-type attacks. Pikachu evolves into Raichu when exposed to a Thunderstone and evolves from a Pichu when Pichu's friendship levels are high enough.

A male Pikachu's debut to the Smash Bros. series is as one of the eight starter characters.

Just like in the games that Pikachu originates from, he is a small, fast character whose play style is prominently dependent on his speed and powerful electric attacks. Pikachu's B move, Thunder Jolt, shoots a beam of electricity that bounces along the stage. His Up-B move is a fast recovery move dubbed the Quick Attack, and his Down-B involves Pikachu striking himself with Thunder, which blasts anyone else standing in the way.

A male Pikachu returns to Melee, once again as a starter character.

While his play style is still incredibly similar to its first appearance in the Smash series, Pikachu is not quite as deadly as it used to be. However, his still a powerful, agile character and a force to be reckoned with. Pikachu gains Skull Bash as its new Side-B move. He is currently 9th on the tier list.[1]

By tradition, Pikachu (the regular male version) as a playable character is featured on his personal three trophies. His normal trophy is acquired by beating the Classic mode with Pikachu on any difficulty, and his Smash Red and Smash Blue trophies are acquired the same way by beating the Adventure and All-Star modes, respectively.

It's safe to say that Pikachu is the most famous and popular of all Pokémon. It has electric pouches in both cheeks; when in danger, it shoots electricity at its enemies. Although Pikachu can evolve into Raichu by exposure to a Thunderstone, many trainers like Pikachu so much that they don't let it evolve.

While its electrical attacks, such as Thunder Jolt and Thunder, are powerful, Pikachu is at its best speeding around the fray and waiting for its chance to strike. You can control the path of Pikachu's two-directional Quick Attack, allowing you to jump twice. Hold down the B Button to charge up Skull Bash. 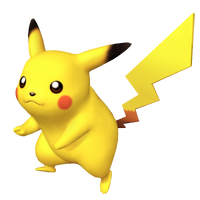 A male Pikachu returns once again as a starter character in Brawl. Visually, Pikachu has barely changed at all from its Melee design, only being touched up slightly. However, Pikachu was improved from Melee, becoming more powerful in the process. It has all of his moves from the first two games.

Like the rest of Brawl's cast, Pikachu also has a Final Smash, a new kind of special attack that was added for Brawl. Pikachu's Final Smash is called Volt Tackle, which involves him turning into a giant ball of electricity that can be controlled by the player. One downside of Volt Tackle is that he can be considered hard to maneuver. This move operates absolutely nothing like Volt Tackle in the original Pokémon games, and is speculated to be based on a special ability in the Genesis/Mega Drive game Pulseman, Volteccer, which Volt Tackle was apparently based on and named after (in the Japanese versions of the Pokémon series).

A Mouse Pokémon. Its lightning-bolt tail and round cheeks are its trademarks. When danger draws near, it uses tiny electric pouches within its cheeks to discharge electricity. When it's really fired up, it unleashes thunderbolts on its rivals. It's said to recharge when it's sleeping. It evolves into Raichu. 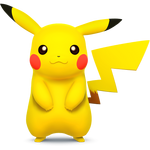 A male Pikachu returns as a playable starter character. Pikachu's design has been updated to look like his more recent appearances, being less chubby and having a brighter color than previous games. Additionally, this marks the first game where Pikachu has visible teeth, which shows whenever he gets damaged.

Pikachu's Thunder Jolt fires off a ball of electricity that bounces across the stage, getting weaker as it travels. It does more damage to enemies in the air. The default down special, Thunder, causes a lightning strike that both shocks opponents and turns Pikachu invincible for a split second. 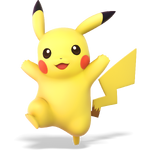 A male Pikachu returns as a playable starter character. This time, accompanied by his female counterparts (Sun and Moon female protagonist version, and Libre Cosplay) as his “alternate costumes”. The other two Pikachus in the character's alt. colors are female. The first six are all male.