PictoChat is a Super Smash Bros. Brawl stage based on the software for the Nintendo DS of the same name. In the beginning, the stage consists of a flat, blank stage. As the match continues, pictures are drawn in. Some have different effects, like a face that blows wind at the players, a roller coaster track with a moving car, a giant Piranha Plant and much more.

This stage is based off of the communication system that is built into the Nintendo DS, known as PictoChat. One can either type or draw a message to his/her friend with their stylus. Originally, it was only accessible from the handheld's main menu and just supported local connections. However, some games, such as 42 All-Time Classics, have integrated PictoChat into the interface with online connectivity.

The stage itself in SSBB is on top of a bar that is located on the top screen of the DS (even though the one writing the message draws on the bottom screen) and tells the user who is joining their chat room. Initially, there were four chat rooms (A, B, C, D) that could each hold up to 16 people. In Brawl, the bar displays the names of the characters in the fight, as if they were joining the room, though it is always shown as room [A]. 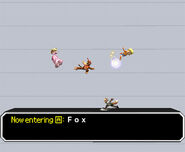 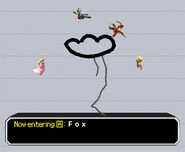 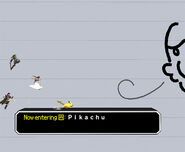 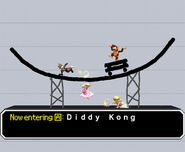 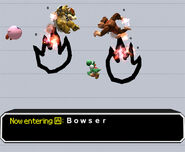 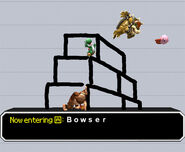 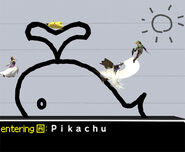 Whale.
Add a photo to this gallery

Retrieved from "https://supersmashbros.fandom.com/wiki/PictoChat?oldid=297504"
Community content is available under CC-BY-SA unless otherwise noted.