This article is about Pichu's appearance in Super Smash Bros. Melee. For the Pokémon in other contexts, see Pichu. Also, for information about the character of whom Pichu is a clone, see Pikachu.

Pichu (ピチュー, Pichū) is a Pokémon character in Super Smash Bros. Melee. Pichu is the "baby" form of Pikachu, and it is also recognized as being a smaller, lighter, and faster clone of Pikachu in Melee.

Pichu is currently ranked 24th in the tier list, the lowest ranked clone character. This is due to the fact that it has poor range, most people can easily chain throw it despite it being small and being the lightest character in the game (which is another huge flaw), and it takes damage from its own attacks, resulting in having the worst matchup spread in the game (though it does have even matchups against Yoshi, Bowser, and Kirby).

Pichu is fought on Pokémon Stadium, with the track Battle Theme playing. 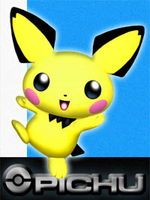 The most noticeable thing about Pichu is its tiny frame: Pichu is the lightest and smallest character in Melee, even lighter than Jigglypuff and Mr. Game & Watch. While this enables it to evade attacks rather well, it flies farther than anyone else when it is hit. It is also easily comboed despite its light weight, due to the long amount of hitstun it suffers.

Being small hurts its range greatly: its physical attacks, while possessing good priority, have extremely poor range. Pichu needs to get very close to do damage, which is a very dangerous place for any character to be. It also has the shortest forward, backward, and tech/ledge roll in the game. Its grab hitbox is the third smallest in the game, another problem. On the upside, its grabs set up many chain throws or combos.

Its electrical attacks help out slightly with range, but each one comes with a catch: Pichu takes damage on using the attack. Simply put, if an electrical hitbox (or that of its non-electric Special Move, Skull Bash) connects with Pichu, it takes "recoil" damage, anywhere from 1-4%. This adds up quickly, as Pichu is lighter than any other character.

This doesn't mean Pichu doesn't have its advantages, though: its KOing power is unusually solid, with three strong smashes and many options to build up damage. Pichu also has the highest item boost in the game, becoming much stronger with any item. Its recovery is very good, it can chaingrab fast fallers with its Up Throw, and it can also tech-chase several characters with its Down Throw. Pichu has two solid projectiles in its Neutral and Down Special Moves (Thunder Jolt and Thunder) and an effective SHFFL. As expected, Pichu is rather agile, and it has a shorter landing lag than any other character.

In the end, Pichu is an inferior version of Pikachu, but it has some qualities that may make it worth a look. It has a better grab game, smaller size, and slightly faster movement.

Pichu is drastically worse than Pikachu, and for many reasons.

Pichu takes recoil damage for all of its electric attacks, its range is among the worst, and some of its attacks hit multiple times, allowing the opponent to SDI out of it. Its pros are not enough to compensate its cons and is among one of the worst characters in Melee.

Left: Jumps up and down four times, chanting "Pichu!"

Right: Lies on the ground and cuddles around, chanting "Pichu!"

In addition to the normal trophy about Pichu as a character, there are two trophies about it as a fighter, unlocked by completing the Adventure and All-Star modes respectively with Pichu on any difficulty:

Pichu
A Tiny Mouse Pokémon identifiable by its big ears. Pichu evolves into Pikachu. It's not very skilled at storing up electrical energy and will sometimes discharge it if jarred. Although it's small, it has enough electrical power to give even an adult quite a shock. It's often startled by its own power.

Pichu (Smash Red)
Compared with Pikachu, Pichu is a tad more nimble and a little more difficult to hit. Those are the only two advantages, however, and since Pichu damages itself when it uses electrical attacks, it's best suited for handicapped matches. Even though Pichu's tough to catch, it's easy to throw its tiny frame great distances.

Pichu (Smash Blue)
Pichu is the lightest character in Super Smash Bros. Melee., and it's top of the class in weakness, too! For Pichu, it's all about scampering here and there to pick up items that will help it survive. The first warp in Agility causes 1 point of damage to Pichu, and the second causes 3, so try to limit the number of times you use the move.

Retrieved from "https://supersmashbros.fandom.com/wiki/Pichu_(Super_Smash_Bros._Melee)?oldid=564745"
Community content is available under CC-BY-SA unless otherwise noted.