Petey Piranha appears as the first boss in Super Smash Bros. Brawl's Subspace Emissary mode, holding the cages of both Princess Peach and Princess Zelda. The player must destroy one of the cages (attacking Petey's head splits the attack's damage to both his cages). When Petey is defeated, whichever cage is more damaged will break, freeing the princess inside. The princess who was not saved will be turned into a trophy by Wario. At the last level, Tabuu resurrects Petey (along with the other bosses) and sends him after the heroes in "The Great Maze."

Unlike in most Mario games, where Petey has a cartoonish voice, Super Smash Bros. Brawl has him using fearsome roars. This could be the result of Tabuu's power, or just to make him more threatening (the same has been done to Bowser and the Kongs).

Petey has only two main attacks. The first involves swinging one of the two cages along the ground. The second is a jumping attack, where Petey tries to stomp and bite the player. Only contact with Petey's head will damage the player when he jumps and stomps.

When either cage is reduced to half health, Petey will roar and his head will glow red momentarily. Petey will then speed up his attacks.

A gigantic Piranha Plant. Unlike his pipe-inhabiting cousins, he uses his legs to walk around. He can fly, too. As you might expect, he often appears as a boss character in Mario's adventures. This may come as a surprise, but he also displays surprising dexterity in kart races and ball games.

In Super Smash Bros. Ultimate, Petey Piranha makes a cameo as Piranha Plant’s Final Smash. Petey will arise from the background and start jumping up and down with cages on both "hands". Fighters who touch the cages will get caught, and afterwards, Petey will shoot flames at the fighters in the cages before finally slamming them to the ground and send those fighters flying. 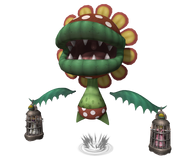 Retrieved from "https://supersmashbros.fandom.com/wiki/Petey_Piranha?oldid=578700"
Community content is available under CC-BY-SA unless otherwise noted.