The Peanut Popgun (ピーナッツ・ポップガン) is Diddy Kong's Neutral Special Move. Diddy takes out his Peanut Popgun, then fires out peanuts that hit the opponent.

By holding down the special attack button, Diddy Kong will lower the Peanut Popgun closer to the ground, stopping at chest level. This allows the peanuts to fly at certain angles, making it useful for pressuring opponents. The speed of the peanut is also determined on the amount of charge, with it going faster the longer it is held. Based on this mechanic, tapping the special attack button makes Diddy Kong launch a peanut that travels at a high arc slowly, while fully-charging it will have Diddy Kong launch a peanut straight at a very fast speed.

If the player holds the button down too long, the Peanut Popgun will explode, briefly stunning Diddy Kong. It does no damage in Brawl, but deals 23% in Smash 4. The shelled peanuts shot out may break, dropping a small edible Peanut, which will recover a small amount of damage when eaten. Interestingly, the Peanut shells fired from the popgun count as items and thus can be caught and thrown back. The Popgun is fully charged when Diddy reaches up and grabs his hat. In order to fire a fully charged peanut without stunning the player, release the Special button as soon as Diddy Kong grabs his hat.

A reflected peanut will be redirected downward based on how long the shot was charged. Peanuts can be caught in midair. 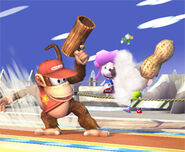 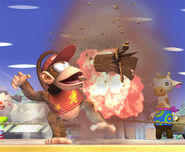 If held for too long, it explodes, leaving Diddy Kong stunned. 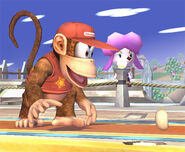 Peanut Popgun exploding in Super Smash Bros. 3DS/Wii U
Add a photo to this gallery

Exploding Popgun is Diddy Kong's Neutral Special Moves that can be used via customizations. Diddy Kong charges his Peanut Popgun until it explodes, the move won't shoot any peanuts.

The Exploding Popgun does not fire any peanut projectiles, resulting in a major decrease in range. However, it does fire a small puff of smoke when uncharged or partially charged that deals minor damage and knockback. This puff of smoke can combo into dash attack or forward aerial, making it a good combo starter; it does not deal much damage though. The fully charged version results in the popgun exploding, leaving Diddy Kong vulnerable as he is temporarily stunned by the blast. However, the explosion is a powerful attack with decent knockback and damage. It can KO at around 120% on most characters but if going for the fully charged version it does have high starting and ending lag, making Diddy Kong easy to punish if the move misses. On the bright side, this move charges up faster than the default.

Jumbo Peanuts is Diddy Kong's Neutral Special Moves that can be used via customizations. Diddy Kong shoots a giant-sized peanut that can deal high damage, but it will travel more slowly.

The Jumbo Peanuts custom variation is a move for players that are dissatisfied with the Peanut Popgun's damage output. The larger projectiles deal more damage and due to their increased size they can be difficult to maneuver around; however, these projectiles are fragile and can easily be destroyed with nearly any enemy attack. They are also slower and travel in more of an arc than the default move. It does still have an impressive range to it when fully charged though.

Peanut Popguns were Diddy's weapons of choice in Donkey Kong 64. He would wield two at once, although his shells didn't become peanuts once he hit his opponent.

A unique firearm that only Diddy Kong can use. It's made of a chunk of wood and shoots peanuts. In Donkey Kong 64, he carried two pistols and could fire two shots at a time. In Smash Bros., the peanut ammo bursts out of its shells when fired. The peanuts can be grabbed and eaten to reduce damage. The longer the gun is charged before firing, the faster the peanuts fly.

Diddy Kong's special wooden gun, locked and loaded with peanut shots. Power up the peanuts by holding the button, but don't get carried away -- an overcharged peanut can explode in the barrel! Charging will improve the range of your shot, so keep an eye on your target as you prepare to fire!

Retrieved from "https://supersmashbros.fandom.com/wiki/Peanut_Popgun?oldid=545202"
Community content is available under CC-BY-SA unless otherwise noted.