When used, two drawings of Peach and multiple hearts frame the screen as Peach dances. The Peach drawings flank the window, and the hearts appear all over the screen. A sped-up rendition of the Coin Heaven theme plays to accompany Peach's dancing. All grounded opponents fall asleep, and all opponents take 10%, 20%, or 40% damage (depending on distance). Characters sleep for longer the closer they are to Peach; this can easily exceed ten seconds even with button mashing. Regardless of whether enemies fall asleep or not, dozens of health-restoring peaches appear (in Ultimate, only three peaches appear that heal 20% damage each). Once the Final Smash is complete, Peach can heal herself easily and/or get free hits on her sleeping opponents. It is recommended to use powerful attacks on them, like a smash attack. If they have high percentages, they may get KO'd.

As with any cause of sleep, only characters that are grounded are effected (this does not apply in Ultimate, where midair enemies are still affected and thus will plummet helplessly towards the lower blast line if there are no platforms underneath them). Characters with many jumps, slow falling speed, and/or good recovery moves can remain airborne during the entire Final Smash. Other ways of avoiding the Final Smash include grabbing edges, wall clinging, and grabbing ladders. These techniques may not stop a character from taking damage, but avoiding the sleep portion of the Final Smash makes it relatively easy to eat the peaches that appear. The fact that the camera zooms on Peach during the Final Smash, may make it harder for opponents to attempt to stay in midair and they can unconsciously self-destruct, since they can't see where they are going. However, the zoom-in is relatively brief, so if the opponent stops jumping and falls onto a surface (if there is one beneath them) or has a clear idea of where they are, the move is easy to avoid.

Since sleeping characters cannot move, this Final Smash is most effective on scrolling stages and custom stages with a drop block closer to the lower blast line without another platform. The move does have a maximum range, but it is extremely large. On Team Brawls, a team of Princess Peach and another character with a very powerful special or smash, for example, Ganondorf with his Warlock Punch, Captain Falcon's Falcon Punch, and Donkey Kong's Giant Punch. Have Princess Peach execute the Final Smash, then have team mate Ganondorf Warlock Punch the sleeping opponents, allowing for very easy KO's.

In Super Smash Bros. for Nintendo 3DS/Wii U, only three peaches appear, each one healing 20% damage. This makes it easier for Peach to eat all the peaches and regain more health before the other characters wake up. 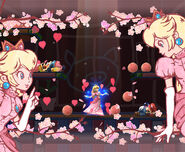 Peach's Final Smash. Images of the princess border the screen and a rain of peaches falls. While this is happening, all the other characters fall asleep. So, Peach's dilemma is this--does she eat the peaches to lower her damage, or does she smack around her dozing enemies? Take stock of the situation and choose the path that leads to victory.

Peach's Final Smash is quite a spectacle to behold. Giant illustrations of Peach herself frame the screen, giant peaches rain down, and all the other fighters fall asleep. The closer they are to Peach, the longer they'll stay snoozing, giving Peach plenty of time to send foes flying or to recover her health with the peaches.