This article is about Peach's appearance in Super Smash Bros. Melee. For the character in other contexts, see Princess Peach.

Jen Taylor
Announced at E3 2001, Peach (ピーチ, Peach) makes her debut in the Smash Bros. series as a starter character in Super Smash Bros. Melee. She is based on her early appearance from the Nintendo 64 era.

Currently, Peach is ranked 7th in the tier list, located in the A Tier. This is due to her moderately powerful attacks, formidable recovery, amazing aerial game, good ground game, and overall good moves. She does possess some flaws (e.g., lacks an aerial meteor smash, slow dash speed, being a tall floaty character, etc.) that prevent her from being top-tier. 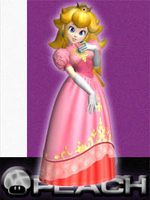 One of the most well known features of Peach is likely the fact that she has incredible horizontal recovery. With fast air speed, a long second jump, the ability to float, the ability to use Peach Bomber to cover horizontal distance, and the ability to use Peach Parasol to cover vertical distance, Peach can recover from just about anywhere off-stage. Peach also has a great air game, because she has little lag for aerials with float cancels, and she is capable of double jump canceling, allowing for very quick ground aerials. Her down special move, Vegetable, is excellent for camping, lead-ins, and edge-guarding. She can defend herself from opponents' projectiles using Toad as a pop-up, similar to Marth and Roy's Counter. Peach is also able to chain grab fast-fallers with her up throw from around 40% damage to 100% damage.

However, Peach has very slow dash speed. She can also get knocked out vertically at relatively low percents due to her being floaty, somewhat light, and having a bad vertical recovery. Her wavedash is among the shortest in the game. When it comes to KOing, her forward throw is powerful. Her down smash is also powerful, and has great priority, speed, range, and anti-shield properties with a strong likelihood of shield-poking, but Peach still lacks a move that KOs at low percentages, which forces her to rack up damage and edge-guards.

Peach's recovery is very versatile due to the fact that she can manipulate her movement in many ways. When normally hit off-stage, she will still have a double jump, a third jump or air dodge, and her float. The player will want to either go over the opponent (usually with a double jump and float) or sweet spot the ledge with her Up B - this method being vulnerable to edgehogs. The Peach Parasol has amazing range, and its disjointed hitbox can easily edgehog many opponents, unlike Marth, who will usually not do damage with a sweetspotted Up B. If the player does not use the Up B, they can air dodge and if so, they can use this aerial evasion to cancel your second jump. If the player does use the Up B, they are still not out of options because the player can open and close the parasol to drastically alter falling speed in order to avoid being hit.

To initiate the Wall Bombing, the player must start it immediately after they recover from the previous Peach Bomber. Using this tactic is very risky in tournament play and should be only used as a last resort. Though it is possible to perform on any stage with a thick base, the player will usually only see this technique employed on Final Destination. The follow-up Wall Bomb is more difficult than it may readily appear. The player can't be too close to the stage to initiate the Wall Bomb and the Peach Bomber must be Smashed each time or they will simply be unable to reach the stage.

Peach is one of the few characters that can do any sort of lengthy stalling; the player can stall with her float, her Up B, her Neutral B, or by using her Side B (Peach Bomber) to hit the wall of the stage. With the Peach Bomber, the player can actually move up a wall or stall indefinitely; this tactic (Wall Bombing to stall) is banned in tournament play.

It had been known for years that Peach could drop a turnip while floating, maintain her float, throw a turnip as soon as a floated aerial ended, and stop floating, but it was not until late 2005 that American Peach Vidjogamer discovered how this was done. For this, Australian Peach Quetzalcoatl named it the Vidjo-cancel, and relayed the information to, among others, Swedish Peach Yuna, who coined the term "Vidjo-drop" and explored the use of both.

Vidjo-dropping will allow the user to do things such as Down Airing into a Kamikaze Vidjo-drop bomb-drop or turnip-drop into another aerial. Likewise, performing a Vidjo-cancel will allow the user to do things such as Neutral-Airing into a turnip throw or Down-Airing into a turnip throw. The latter is especially useful if the vegetable in question is a grandfather/stitchface turnip. The player can also Down Air while barely hitting the opponent, perform a Vidjo-drop bomb-drop and immediately airdodge to avoid the ensuing explosion, though this technique is easily countered by airdodging by people who often airdodge after a Down Air from Peach in the hopes that she mistimes the follow-up or that they can simply shield it if they are on the ground.

The Vidjo-drop and Vidjo-cancel do have their limitations, however. Because of the nonexistent amount of stun in Peach's attacks, a Down Air into a Vidjo-cancel or even a Vidjo-drop can be shielded as long as the person hit by the Down Air is not launched off the ground by it—which, unfortunately, requires high percentages. Vidjo-dropping will also allow characters with little stun (all of the floaty characters) to Neutral Air out of stun or just airdodge.

In addition to the normal trophy about Peach as a character, there are two trophies about her as a fighter, unlocked by completing the Adventure and All-Star modes respectively with Peach on any difficulty.

Peach (Smash Red)
Peach's ability to float is invaluable in Super Smash Bros. Melee, as she can return from incredible distances. Balancing this talent, though, is the fact that she's quite light and can be sent flying with a single powerful attack. Her attacks are fairly weak, so you'll have to hang around to win.

Peach (Smash Blue)
Peach's Smash A attack will set her swinging with either a frying pan, tennis racket, or golf club. These bludgeoning devices appear randomly and have different reaches and power levels. The princess uses Toad to absorb attacks, and he counters by sending spores out at attackers. Don't worry about the little guy, though; he takes his job seriously.