The Party Ball as it appears in Super Smash Bros. Brawl.

A Party Ball is a container item first introduced in Super Smash Bros. Melee and has since appeared in all Smash Bros. games. When opened, it can drop a variety of items ranging from food to Bob-ombs.

A Party Ball can be opened by hitting it (requiring 30% damage in Melee and only one hit in Brawl and 3DS/Wii U), or thrown at opponents, which will cause the Party Ball to home onto the opponent. Once the Party Ball hits the ground or an opponent, or is attacked sufficiently, it will float up into the air, flash red while playing a jingle to indicate that it is about to open, then open to release the items, sending them downward. Because it is a carrying item, it will disable the character's attacks and jump, and reduce their ground movement, with the exception of Donkey Kong.

Party Balls are just what they sound like: a recipe for wild fun packed into a paper ball. Throw or strike one into the air, then wait for it to trigger its time-release. Parties are always unpredictable, so here are the odds on how zany your party might be: Self-destruction: 10% Food banquet: 36% Bob-omb fest: 12% Other: 42% 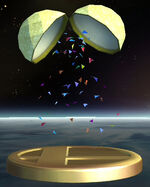 A giant ball stuffed to bursting with items and food. Throw it or attack it, and after a few seconds, it will burst open with fanfare, spilling items all around. The fluttering confetti adds to the celebratory atmosphere. Some Party Balls are filled with nothing but bombs, though, so handle with care. Perhaps if you just pulled the string...Naw, that doesn't work.

A celebratory ball, filled with irresistible treasures just begging to be released. Once thrown, it floats into the air and releases its prizes. It could be a variety of awesome items, but you should be careful--sometimes the Party Ball is stuffed full of Bob-ombs! How rude!