This article is about Palutena's appearance in Super Smash Bros. Ultimate. For other uses, see Palutena.

In the first two methods, the player must fight and defeat Palutena on Palutena's Temple.

Palutena was heavily buffed in the transition from SSBWU/3DS. In addition to the universal changes, the majority of Palutena's ground moves have less startup and end lag, more reliable hitboxes, and deal more damage. Her zoning game also significantly improved with Autoreticle's buffs and the addition of a new ranged option in Explosive Flame for ledge-traps, mixups, and other options. Her Down Special also combines her Counter and previous Side Special Reflect Barrier and received buffs to make them viable options in defensive play.

Aesthetically, Palutena has a subdued color scheme, with simpler detail in her armor and chiton, as well as more realistic and expressive facial expressions. Palutena's design also incorporates her chiton covering more of her thigh due to age restrictions, which was first present in the Japanese version of SSBWU/3DS following the 1.0.6 update.

Since the beginning of Ultimate, Palutena has always had a very positive reception among the Smash community, as many top players noticed her considerable buffs from Smash 4 early on and was agreed on as a high tier for much of 2019. However, after Nairo won Mainstage and Let's Make Big Moves, her already strong reception and results have further increased, with strengths such as her notorious neutral aerial, KO confirms from her down throw, and her relatively low learning curve becoming even more apparent, while her few weaknesses are relatively minor. This has to led to nearly all top players to believe she is a top tier, with many claiming she is among the best in the game, alongside Pikachu, Joker, and Peach.

While she has been nerfed in updates 7.0.0 and 11.0.0, these nerfs have had a relatively minor effect on her viability and she remains an excellent choice in competitive play.

However, Palutena's metagame has suffered from a brief period of stagnation due to the ban of her best player, Nairo. Although this ban has been overturned since, he has yet to make an active return to the competitive scene, partly because he was also banned by Twitch and any attempt to stream tournament matches featuring him is considered ban evading by the streaming site. In his absence, Palutena is now currently represented by players such as Abadango, Jagaimo, Gen, Chag, Compact, and many more.

Referring to being a goddess herself, Palutena's opponents all come from series where religion and mythology play a key role. The title is the same as a phrase she says in her debut character trailer for Super Smash Bros. 4.

Palutena was among the fighters that were summoned to fight the army of Master Hands.

During the opening cutscene, Palutena was present on the cliffside when Galeem unleashed his beams of light. She attempted to block a beam with Reflect Barrier, which the beam completely pierced, disintegrating her. Her defeat causes Pit and Dark Pit to lose their Power of Flight, making the duo fall victim to the beams as well. They were all placed under Galeem's imprisonment alongside the rest of the fighters, excluding Kirby. A puppet fighter cloned from her is later seen alongside ones cloned from Greninja, King Dedede, Pokémon Trainer and other fighters.

Palutena is the last fighter to be found to be imprisoned by Galeem. In The Final Battle, she is called by Galeem as part of reinforcements after Dark Samus is awakened and Crazy Hand is beaten. She is an obligatory unlock for the true ending, as awaking her leads to a battle with Master Hand that frees him from Galeem's control (both of whom's defeats greatly shifts the balance of power in Dharkon's favor). 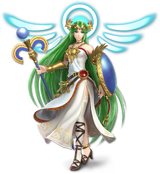 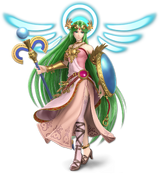 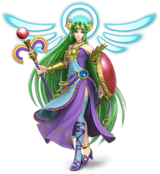 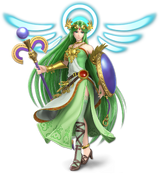 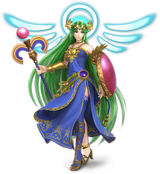 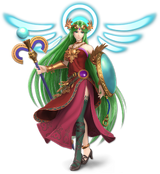 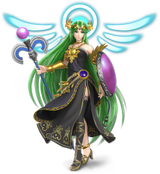 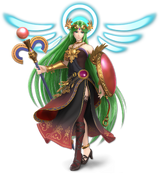 Palutena using her Down Tilt against Villager on Gaur Plain