Aya Hisakawa
Palutena (パルテナ, Parutena?, Palutena) is a character from the Kid Icarus series. She first appeared in Super Smash Bros. Brawl during Pit's Final Smash, Palutena's Army, where an image of her forms in the background while centurions attack opponents. She makes her playable debut in Super Smash Bros. for Nintendo 3DS and Wii U, and returns as a veteran fighter in Super Smash Bros. Ultimate. Pit's bow and arrows are named after her.

Palutena is the Goddess of Light from Angel Land. Not much was known about Palutena's personality in the first few Kid Icarus games aside the fact she was very wise. With the creation of Kid Icarus: Uprising Nintendo was able to develop her more as a character, as she is in constant communication with Pit via psychic communications. It is shown that Palutena, while a Goddess, is very dignified when she wants to be. However, most of the time, she is actually quite cheerful and playful. While being the leader of Angel Land, and ergo Pit's boss of sorts, she treats him more like a kid brother than an actual servant.

She is very playful and mischievous when she wants to be as well. Often she will put Pit in very dangerous situations to complete missions she has assigned him just for laughs. During their psychic communications she is prone to speaking to Pit's adversaries, and is also known to use modern day quotes and phrases incorrectly due to her use of a large vocabulary that confuses Pit when conversing. She is shown having a huge appetite, to the point the mention of anything food related making her hungry, an example being the mention of eggs making her craving omelets. She is very touchy when it comes to her age despite her youthful appearance, and detests it to the point of becoming agitated when being called Ma'am.

As the Goddess of Light, she has great power over the element, and therefore is capable of performing powerful magical abilities with it. One of her most powerful attacks is a giant beam of vaporizing light that can disintegrate enemies. She is also the one who supplies Pit his Power of Flight and all his other powers. She is quite omnipotent, and she demonstrates her godly insight to look into the pasts of total strangers. Palutena has typical abilities shared by other gods from the Kid Icarus series such as telepathic communication, as mentioned before, and summoning large projections of herself.

Originally, Palutena was voiced by Ali Hillis in Kid Icarus: Uprising, but was replaced by Brandy Kopp in Super Smash Bros. for Nintendo 3DS and Wii U due to Hillis not being available at the time of the recording.

Palutena appears in Pit's Final Smash, Palutena's Army. In addition, she also sends Pit to save the world from the Subspace Army in The Subspace Emissary.

Palutena's trophy is obtained through clearing the "Cleaning House in Skyworld" event.

Palutena
The ruling goddess of Angel Land. Palutena showered the earth with rays of light, using her powers for the good of mankind. But Medusa, who in her hate for mankind was banished to the underworld, makes war on Palutena and wins, capturing and holding the goddess deep within a temple. Palutena entrusts Pit with a sacred bow and the task of defeating Medusa. 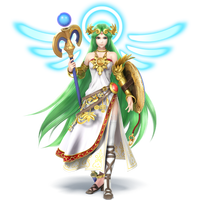 Palutena appears as a playable newcomer in Super Smash Bros. for Nintendo 3DS and Wii U. Her design for this game is based off her appearance in Kid Icarus: Uprising, which is based off her new design in Brawl. Unlike every other playable characters in the game (minus the Mii Fighters), Palutena can choose between three completely unique customization options for all four of her special attacks, which can make her into either a long or close-range fighter. All of her normal and customized special moves are based on the various Powers that she would grant Pit and the Fighters in Kid Icarus: Uprising.

Palutena's home is featured as an available stage in Wii U version, called Palutena's Temple. Designed to resemble its appearance in Kid Icarus: Uprising, a large, golden statue of herself appears on the stage. Palutena also appears in Pit's Smash Taunt Palutena's Guidance, where she discusses strategies for different fighters alongside Pit and Viridi.

Palutena
In Kid Icarus: Uprising, the goddess of light uses telepathy to communicate and grants miracles to support Pit on his adventure. In Smash Bros., she has special moves like Warp and Heavenly Light at her disposal. She's very adaptable—you can customize her into a long- or close-range fighter!

Palutena (Alt.)
Palutena's Reflect Barrier side special deflects any attacks and projectiles that come at her from the front. Unlike other reflective moves, you can leave this barrier in place and it will keep reflecting. If you really want to ruin someone's day, you can push them over an edge using this move. 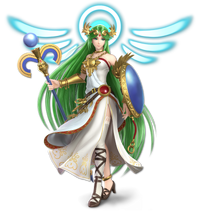 Palutena makes her return to the series in Super Smash Bros. Ultimate as an unlockable character. She received several noteworthy changes in the transition, such as her Counter and Reflect Barrier being a single move now, as well as one of her Custom Neutral Special Moves in the previous title, Explosive Flame, being her new Side Special Move.