Palkia(パルキア, Parukia) is a legendary Pokémon from the Pokémon universe.

A Spatial Pokémon. In the Sinnoh region, this Pokémon has been revered for many generations, much like Dialga. Dialga warps time, but Palkia has control over space. It lives between parallel dimensions and is known for its power, rumored to be able to warp space. It can use Spatial Rend to rip through the very space an enemy resides in, damaging the foe at the same time.

Palkia was confirmed to appear in the new Smash Bros. from a Poké Ball instead of being a background character like his appearance in Brawl. Upon being released, Palkia executes his trademark attack, Spacial Rend, which turns the stage upside down. He can also cause damage to characters who make physical contact with him.

Stories surround this Legendary Water/Dragon-type Pokémon, saying that it has control over all of space. Its Spacial Rend attack will tear space and flip the screen upside down. When this happens, the directional controls of all the fighters will become flipped as well.

The stage flipped upside down. 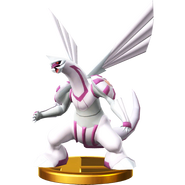 Palkia's trophy in Super Smash Bros. for Wii U.

Palkia as a Stage Hazard on Spear Pillar in Super Smash Bros. Ultimate.
Add a photo to this gallery
Retrieved from "https://supersmashbros.fandom.com/wiki/Palkia?oldid=591765"
Community content is available under CC-BY-SA unless otherwise noted.