Pac-Man was created by Tōru Iwatani when he ordered a pizza. When the first quarter of the pizza was cut out, it looked similar to a head with its mouth open. This is what inspired him to create the character that was originally Puck-Man, named after the Japanese phrase "paku paku", an onomatopoeia for the sound of eating. However, that name was never used for fear of American kids defacing the arcade machines and causing an obscenity, by changing the "p" to an "f". The name was re-translated as Pac-Man instead, eventually becoming his official name in all regions. Pac-Man became very popular in Japan and in the United States of America, making him a legendary video game icon.

Pac-Man has little to no dialogue in most of his games, mostly only making sound effects when being injured. However, certain games have given him a voice, such as Martin T. Sherman in Pac-Man World 3. In the Pac-Man cartoon show, he was voiced by Marty Ingels.

Pac-Man's origin has never been revealed in terms of his series' canon. The only known things about him is that Pac-Man is much like Kirby in that one of his favorite things is eating. He is also a father to Jr. Pac-Man and Baby Pac-Man and husband to Ms. Pac-Man. He is also very good at mazes, in which he is usually trapped when encountering Blinky, Inky, Pinky, and Clyde. 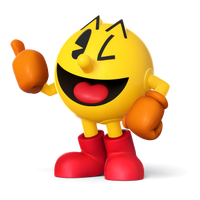 Pac-Man was confirmed as a new playable fighter in Super Smash Bros. for Nintendo 3DS and Wii U, being revealed on June 10th, 2014. Most of his attacks invoke various classic Pac-Man games. Some of his attacks have him resembling his classic form, such as his dash attack and his up and side specials, and his smash attacks all involve him hitting opponents with the Ghosts. In addition, Pac-Man's grab involves him drawing in opponents with the Boss Galaga's beam, and his up taunt involves him holding out his hand and one of several random Namco characters (mostly arcade characters) appearing.

PAC-MAN
The yellow, circular hero of the game PAC-MAN, which is recognized as the "Most Successful Coin-Operated Arcade Game" by Guinness World Records. In Smash Bros., he uses several moves inspired by the original PAC-MAN. Wakawaka your foes by charging up the Power Pellet move and aiming at them.

PAC-MAN (Alt.)
PAC-MAN's Fire Hydrant down special pushes opponents away with blasts of water. You can drop the hydrant on top of your opponents to damage them, but they can also attack it to damage you if you're standing on it! His Pac-Jump up special spawns a trampoline he can jump on three times—the third jump is especially high! 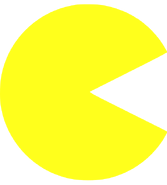