PSI Magnet (Japanese: サイマグネット Saimagunetto; called Psychic-Magnet in Super Smash Bros.) is Ness and Lucas' Down Special Move. It absorbs energy-type projectile attacks. Upon absorption, the attack lowers the user's percent (or replenishes their health in Stamina Mode). The user cannot be healed to a percent lower than zero, though. The move also differs slightly between the two characters that use it.

Ness's PSI Magnet is formed centered around his body, covering himself entirely with it. This gives him more defense than Lucas, making him a much more defensive player. In Brawl, when released, Ness' PSI Magnet pushes enemies and some items (such as Snake's Grenades) away from his body. This move's function hasn't changed in the entire series. However, visually, it has looked different in every game. 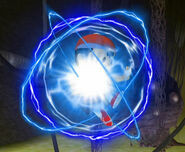 Super Smash Bros. for Nintendo 3DS and Wii U.
Add a photo to this gallery

Lucas' PSI Magnet is formed centered around his outstretched hand, and thus the magnet doesn't fully cover the area behind him. However, Lucas can instantly turn around before getting hit from the back and will absorb projectiles, even if two are coming from both directions simultaneously, which means the magnet essentially covers his whole body as well. It should be noted that a similar attack, Mr. Game & Watch's Oil Panic, allows the player to turn around while holding the absorber in place. Lucas' version has a hitbox when released, which deals damage and has decent knockback, even enough to KO. Additionally, Lucas recovers slightly more percent than Ness when he absorbs a projectile, but not significantly. A Custom Mii Gunner can also absorb energy-projectiles with it's Absorbing Vortex. 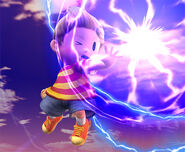 PSI Vacuum pulls opponents in, and then deal damage at the end of the move. Does not pull projectiles in.

Foward PSI Magnet is a psychic field that appears in front of Ness and can deal damage when vanishing just like Lucas.

When used in the air, this move will cancel any vertical/falling momentum temporarily. This allows for this move to be used as a pseudo-SHFFL if used immediately after a jump, or a pseudo-wavedash if the move is activated at a downward diagonal angle. If using the C-Stick for performing Special Moves' control scheme for the Gamecube Controller (B-Sticking), this move, when used right after PK Fire for Lucas, will allow the wavedash to work much more easily.

When a projectile is absorbed, if the control stick/pad (depending on controller) is tapped in a direction, Lucas or Ness will either roll in that direction, sidestep, or jump without having to release the attack first.

Here is a list of projectiles that can be absorbed by PSI Magnet.

All attacks and hazards from the original that can be absorbed still apply.

All attacks and hazards from Melee that could be absorbed still apply unless noted otherwise.

All attacks and hazards from Brawl that could be absorbed still apply unless noted otherwise.

Retrieved from "https://supersmashbros.fandom.com/wiki/PSI_Magnet?oldid=542333"
Community content is available under CC-BY-SA unless otherwise noted.