PK Thunder is terrible as a recovery unless a player can use it accurately. If a player finds themselves close to the edge of the stage but have fallen down too far, get away from the edge (a short distance) and then use PK Thunder. However, PK Thunder has some offensive uses as well. When Ness hits himself with it and becomes an electrified human missile, it has deadly capabilities. If an opponent is recovering to the stage, PK Thunder is an effective way to edge-guard. When an opponent is hit by PK Thunder, they are hurled in the direction the projectile came from. This means when Ness uses it as they are recovering, they will be hit towards the edge. This is when Ness has the opportunity to run in for the meteor. Multiple PK Thunders can be used, but using them too often will result in Ness missing with it, leaving him vulnerable to attack. PK Thunder is also good for juggling opponents that are too high for Ness to simply jump up and up-air. When Ness is descending down on the stage, use PK Thunder and aim it towards the opponent that is on the ground; once they are hit by it and suffering the hitstun, fast fall to the ground to prevent being juggled. 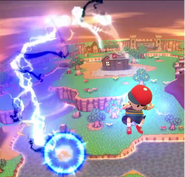 Ness guiding PK Thunder toward himself in Super Smash Bros. for Wii U.

Lasting PK Thunder is one of Ness's Up Special Moves that can be used via customization. This attack will send Ness further airborne, deals repeated damage, but it deals less damage. It doesn't vanish when hitting the opponent. This move functions similarly to Lucas's PK Thunder.

Rolling PK Thunder is one of Ness's Up Special Moves that can be used via customization. This allows Ness to deal more damage and knockback, but the thunderball travels slower.

"PK Rocket" is the term used for hitting Ness or Lucas with their own PK Thunder while it is still under their control. The attack will send them flying. The Japanese developers called this move PK Jibaku (PK自爆). The word jibaku means 'self-destruct' or 'suicide bomb', a fitting term for a tactic that turns Ness and Lucas into human missiles.

By using this technique, they will transform into a human projectile, which will move in different directions depending on what part of the body is hit. This is also Ness and Lucas' main method of recovery, given that it launches them fairly far in a straight direction. In addition, while performing PK Thunder, Ness' PK Thunder curves in a larger arch than Lucas, thus Lucas requires less room to use PK Thunder than Ness. However, Ness' PK Thunder is faster, making up for this. While using the move, the user will fall much slower. Unfortunately, using this in a trench makes it more difficult (to flat-out impossible) to guide the PK Thunder without striking the walls of the trench. It should also be noted that on stages like Battlefield or Final Destination, if Lucas' PK Thunder is aimed wrong, the user will bounce right off the corner of the stage, leaving him in a helpless animation away from the ledge.

Ness' version deals one strong blow, dealing 25% damage with extremely high knockback, K.Oing lighter characters at 30% or less, although the Super Smash Bros. version is considerably stronger than the Melee equivalent. Also, if used up close, it can bring Ness to a short stop. 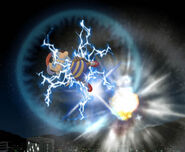 Lucas' version of the attack hits multiple times, and if all hits connect, it will deal a massive 43% damage and has decent knockback, making it Lucas' most damage-dealing move, with the exception of PK Starstorm, which may not be used in competitive play. However, it is unlikely to get the full 43% damage, as it takes very long to start, and as such, is easily dodged or DI'd out of. Lucas' PK Thunder covers more ground than Ness', so Lucas' is slightly more effective.

CPUs playing as either Ness or Lucas are also programmed to use this strategy, but they only use PK Thunder vertically, even in situations where only recovering horizontally or diagonally would prevent being K.Od.

For tactical uses, Lucas' PK Thunder can be used to "Thunderglide". Thundergliding is when the player runs off a platform, then immediately uses PK Thunder. The effect should come out to being the PK Thunder being much closer to Lucas than normal. Then, guide the thunder into Lucas and he should angle down towards the ground. If performed right, Lucas' direction will go from diagonal to horizontal as he glides along the ground. Otherwise, he'll crash into the ground like a normal poorly aimed thunder. Lucas will stop at the edge on his own, making this move safe to use on a stage like Battlefield. The thunderglide is great for surprising opponents for a quick 20-43% damage.

PK Thunder (localized as "PSI Thunder" in EarthBound) is a psychic attack that first appeared in EarthBound Beginnings and later appeared in MOTHER3. Unlike the Super Smash Bros. series, in Earthbound, PK Thunder can attack multiple enemies at once, but it misses it's target(s) if there are fewer enemies. In EarthBound Beginnings, PK Thunder had 100% accuracy and the final stage can hit all opponents. In MOTHER3, PK Thunder could miss, but the accuracy was much better than in EarthBound, making the former's PK Thunder much more viable than the latter's version. Like Ness's and Lucas's other special moves, they don't learn the attack in their games, EarthBound and MOTHER3 respectively. Paula and Poo use it in Earthbound, while Kumatora uses it in MOTHER3.