PK Flash is Ness' Neutral Special Move from Super Smash Bros. Melee onwards. When the move is initiated, a sphere of green light appears above Ness. As the B button is held, the ball of light moves downwards and increases in power, until the B button is released, or until it is fully charged, at which point it explodes with very high lethality. The ball of light is arguably easier to control in Brawl than it is in Melee, it can only be controlled sidewards.

PK Flash can be charged until it falls to the altitude from where Ness initiated it. It can be slightly moved horizontally and vertically by using the Control Stick. If the attack falls upon a platform or a higher level of a stage before it is detonated, it will disappear harmlessly. This can be a problem, especially in Brawl, since it falls below Ness' height when fully charged. On the upside, it is still considered fully charged if the B button is released right before it hits the ground. When performed in the air, it puts Ness into a helpless falling animation.

Fully charged, without the influence of special conditions, it deals a maximum damage of 39%, with huge knockback strong enough to knock people off the stage. Due to Ness's accent, many players mishear "PK Flash", instead hearing any of a variety of phrases, such as "PK Pulse", "PK Cross", or "PK Push". However, when Kirby copies Ness, he clearly says "PK Flash" when he uses it, even though Kirby and Ness have the same voice actress.

PK Flash is an extremely powerful attack but also moves quite slowly. It gets more powerful the longer a player holds down the special attack button; maneuver it towards the opponents to catch them in the blast; the centre of the blast is the most powerful part and the move can kill at percentages as low as 60%. Due to its slow speed, PK Flash is hard to hit an opponent with. Ness can hit an opponent with it more reliably if they are suffering shield break or when they are helpless. PK Flash is very useful for edge-guarding; when the opponent is recovering low, move PK Flash off the edge of the stage. When they reach the peak of their recovery, release the special attack button to hit them with the blast. This is most effective with characters like Link, Falco, Mario, Wario, and Little Mac. 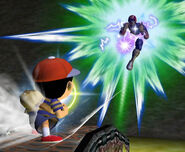 Rising PK Flash is one of Ness' Standard Special moves that can be used via customizations. It's a PK Flash that just keeps rising. Deals less damage and has less sideways movement. It also moves faster and has longer range.

Ness using PK Freeze.
Add a photo to this gallery

PK Flash (localized as "PSI Flash" in EarthBound) can only deal minor effects like uncontrollable crying, feeling strange, or becoming numb at lower power levels. However, at the Omega (Ω) level, it is capable of instantly destroying enemies in rare cases. It is one of only two offensive PSI moves which are unique to Ness, the other being PSI Rockin.

In MOTHER3, Lucas would learn PK Flash after he was shocked by an electrical discharge. PK Flash in MOTHER3 didn't have any power levels, so PK Flash could deal minor status afflictions like uncontrollable crying or instant destruction at any point of the game. Despite knowing it in game, Lucas does not use PK Flash in Super Smash Bros. Brawl.

Retrieved from "https://supersmashbros.fandom.com/wiki/PK_Flash?oldid=575156"
Community content is available under CC-BY-SA unless otherwise noted.