PK Fire (localized as PSI Fire in EarthBound) is the Side Special Move of both Ness and Lucas, and was Ness' Standard Special Move in Super Smash Bros.

When performed, the character fires a yellow, lightning-bolt shaped projectile, that travels in a straight line until it hits an enemy or destructible portion of a stage, at which point it explodes into flames. If it does not hit either of the aforementioned objects within a few feet or hits a wall, then it dissipates.

Ness' PK Fire has been the same through the entire Smash series. It goes up to 16% damage, as Ness' PK Fire lasts longer than Lucas'. The angle at which Ness would shoot PK Fire would be oblique on the ground, while diagonally downwards if used in mid-air.

If Ness' PK Fire hits, it explodes into a stationary pillar of fire that hits an enemy several times. In mid-air, however, it falls down slowly until it hits the ground or dissipates. DI is not very effective against it, allowing Ness to combo his opponent or use one of his finishers while the enemy is stunned. Ness can use this move in conjunction with his second jump to perform the PK Jump, which slightly boosts the air speed of his second jump at the expense of height, giving him a slightly better approach. The main difference is the damage within the games and the lag/speed of the move. It does overall the most damage in Brawl, followed by Super Smash Bros., and then followed by Super Smash Bros. Melee.

PK Fire can rack up lots of damage but also has some other uses. When edge-guarding, jump up and PK Fire off the stage to hit the opponent with it; the multi-hits keep them from being able to recover, giving Ness time to get in that lethal back-air. However, PK Fire has some combo uses as well. It is a great combo starter; once the move successfully hits, dash in and grab the opponent and immediately down throw. This will get them airborne, allowing Ness to unleash some neutral or forward airs. 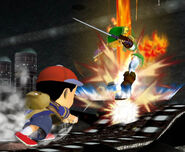 Ness's PK Fire travels at more of an angle in the air.

Ness using PK Fire while in midair in Super Smash Bros. for Nintendo 3DS
Add a photo to this gallery

PK Bonfire is one of Ness' Side Special Moves that can be used via customization. The attack doesn't travel as far, but lasts longer and in turn does more damage.

PK Fire Burst is one of Ness' Side Special Moves that can be used via customization. Rather than leaving a lasting flame, this version deals one strong hit, dealing decent knockback and damage like Lucas.

Lucas' PK Fire deals 9% damage, and always travels horizontally, regardless of whether or not he is in the air. When the bolt hits an opponent, it explodes into a horizontal burst, hitting once, and dealing fair knockback to the enemy. The horizontal burst has good range, and can damage others in the way of the burst, although it does little-to-no knockback. Lucas' PK Fire has many interesting properties, such as pushing him back with a set force after shooting the bolt. Because of these, Lucas can use his PK Fire to perform the Zapjump, the Wavebounce, or the Magnet Pull, an extension of the Wavebounce, making this one of Lucas' most varied moves.

Lucas' PK Fire hitting Sonic in midair.
Add a photo to this gallery

In EarthBound, the attack is actually not learned by Ness (something Paula's Trophy in Melee explains). It is described as a wave of fire shot from the fingers, and is capable of damaging rows of enemies. Similarly, in Mother 3, Kumatora rather than Lucas, is the possessor of this move.

Retrieved from "https://supersmashbros.fandom.com/wiki/PK_Fire?oldid=542444"
Community content is available under CC-BY-SA unless otherwise noted.