This article is about Captain Olimar's appearance in Super Smash Bros. for Nintendo 3DS and Wii U. For other uses, see Captain Olimar and Pikmin (species). For the article on the character who is one of Olimar's alternate costumes, see Alph.

Pikmin & Olimar (ピクミン＆オリマー, Pikumin ando Orimā?), also known as Olimar, is a playable character from the Pikmin series in Super Smash Bros. for Nintendo 3DS and Wii U.

Olimar received a few buffs, most notably in recovery, and a few nerfs that reduces a bit his damage potential.

Up: Jumps joyfully, similar to his animation in his games when he gains a new part for the Dolphin.

Side: Lays down on the ground as if he were asleep, then rolls over and gets up; likely based on the "nap" ability in Pikmin to return to the ship quickly.

Down: Plants feet and spins his hips twice.

A veteran spaceship pilot for Hocotate Freight, Captain Olimar partners with Pikmin in Smash Bros. to help him in battle. Olimar is much stronger when he's got Pikmin with him, so keep them plucked and good to go. Pikmin abilities are based on their color--learn what each is best at!

Pikmin aren't just good for attacking, you know. For example, when you throw them, they can pick up items on their way back. Only items that aren't very heavy, though! Also, if there's someone charging or shooting at you, a well-timed Pikmin throw can stop them in their tracks!

Alph is a young explorer who crashed on the planet PNF-404. As the engineer of the S.S. Drake, he feels responsible for finding the missing crew and the ship after the crash. Walking up in a pond, Alph quickly encounters a tiny creature--it's a Pikmin! 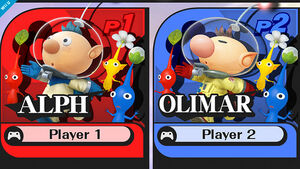 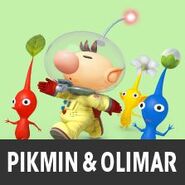 Retrieved from "https://supersmashbros.fandom.com/wiki/Olimar_(Super_Smash_Bros._for_Nintendo_3DS_and_Wii_U)?oldid=476974"
Community content is available under CC-BY-SA unless otherwise noted.