Whenever Mr. Game & Watch collects energy with the bucket, he will get a small frame of invincibility.

Despite its seemingly weak appearance, Oil Panic can be extremely deadly. It multiplies the power of the collected projectiles by 2.8x. While this may be relatively harmless with projectiles like Mario's Fireball or Fox's Blaster (dealing damage roughly equal to that of a Smash attack), the bucket can be considerably dangerous if it absorbs something with decent power. While something like an Aura Sphere can fill up anywhere from 1-3 "levels", an Aura that fills up most of the bucket and the last part being filled with something weaker can still do considerable damage. If the bucket absorbs something like a fully charged PK Flash however, the bucket is capable of dealing massive damage where it can KO most opponents in one hit or instantly break their shields if not perfect guarded.

The attack is even deadlier because it has almost no start-up lag, long reach, and a disjointed hitbox with a very long duration. Unlike most other chargeable attacks, Oil Panic keeps its "charges" across stocks. If Mr. Game & Watch is KO'd with two units of Oil, he will still have those two units when he respawns. Oil Panic's maximum damage is 200% in Melee and 60% in Brawl and since Oil Panic's knockback is determined by the damage absorbed, its knockback caps at these percentages as well. Oil Panic cannot absorb non-energy based projectiles however, such as Link's Arrows from Hero's Bow. On Boss Battles and the Subspace Emissary, Oil Panic's maximum damage varies on any difficulties. On higher difficulties, Oil Panic does higher damage up to 60%, unless a sticker for weapon attacks after absorbing enemies' projectiles is being used. 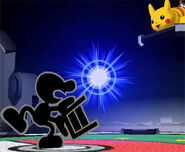 When three energy projectiles are absorbed, Oil Panic can be used to throw oil at an opponent.
Add a photo to this gallery

Efficient Panic is one of Mr. Game & Watch's Down Special Moves that can be used via customizations. Mr. Game & Watch can fill the bucket with only one projectile, but the oil's range is very short, and it deals less damage.

The Efficient Panic grants Mr. Game and Watch faster use of the attack since only one energy projectile is required in order to fill up the bucket. However, the move has severely less attack and KO power. The oil spilled out is also much smaller in size, meaning that Mr. Game and Watch will have to be more precise with when and where the move is used.

Panic Overload is one of Mr. Game & Watch's Down Special Moves that can be used via customizations. Mr. Game & Watch puts a bucket that has a small absorption area. However, the oil has a longer range and travels slower.

Panic Overload requires that Mr. Game and Watch be more precise with how the bucket is filled up as it will not absorb energy projectiles outside of a certain range, smaller than that of the default. However, the oil, when dumped out, is a very large hitbox that covers a much wider area as well as going out farther from Game and Watch than the default. This large hitbox is useful for guarding an edge since it can easily deter recovering opponents.

There's a glitch known as the Kamikaze Glitch in Melee where if Mr. Game & Watch attacks a shielding opponent with Oil Panic after it absorbed three strong enough projectiles, such as three fully charged PK Flashes, the opponents shield will shatter and Mr. Game & Watch will be sent flying back at extreme speeds invariably to his death unless there's a wall behind him. If Mr. Game & Watch collides into anyone along his trajectory, they will be sent vertically with extreme knockback, also resulting in OHKOs. This is the only instance in Melee where someone can be harmed by colliding with a launched opponent that was not thrown.

In Brawl, Oil Panic gained an interesting and very useful property. When Mr. Game & Watch uses an empty Oil Panic while in knockback, he will halt all momentum. As such, when used for momentum canceling, Mr. Game & Watch completely negates all momentum upon the first frame of activation. When used in conjunction with DI, Mr. Game & Watch is capable of surviving far beyond other character of his weight class such as Squirtle and even outlasting heavier middleweights such as Mario.

In Super Smash Bros. Ultimate, there is a glitch called Bucket Sliding in which Mr. Game and Watch dashes forward, and on exactly frame 18, use Oil Panic. Make sure to hold the B button during this process. If done correctly, Mr. Game and Watch will now be frozen in his Oil Panic animation, but able to slide around in it. The bucket now instantly reflects any projectiles, and can be cancelled by jumping or releasing the B button.

Retrieved from "https://supersmashbros.fandom.com/wiki/Oil_Panic?oldid=574700"
Community content is available under CC-BY-SA unless otherwise noted.