Smashpedia
Register
Don't have an account?
Sign In
Advertisement
in: Trophies (SSBM), Common enemies, The Legend of Zelda universe,
and 3 more

An Octorok in the Underground Maze.

Octoroks are common enemies from the The Legend of Zelda universe that appear in the Underground Maze stage of Super Smash Bros. Melee's Adventure Mode, as well as barrels and crates. Octorok also appears as a trophy in Melee. They are purple octopus-looking enemies that have four legs.

Octoroks start firing rocks as a character approaches them. If a character gets hit by a rock, they will take damage. You can deflect the rocks back at them with your shield. Octoroks take about two hits before being KO'd and can also be picked up using the Z button.

For every Octorok a character KO's, 150 points are added to their Octorok KO bonus. Octoroks will duck to avoid damage, but can be grabbed to damage them.

This monster looks kinda like an octopus, but it shoots rocks out of its mouth. They've been around since the very first Legend of Zelda game, and the Octorok from Skyward Sword appears in this version of Smash Bros. They'll hide underground, emerging to fire at nearby fighters. If you're quick, you can run forward and pluck them out.

These common enemies made their debut in the very first Legend of Zelda game and have been a staple of every game in the series since. They shoot rocks from their mouths at high velocity, but the projectiles are simple to block and do very little damage. Octoroks have low stamina, so they don't pose much of a threat to good fighters. 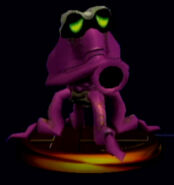