Nintendogs + Cats: Golden Retriever & New Friends (2011)
The Nintendogs universe is a real-time pet simulation franchise developed and published by Nintendo for the Nintendo DS. It was originally released in three different versions: Dachshund & Friends, Lab & Friends, and Chihuahua & Friends, which was later joined by a Dalmation & Friends version. It has been re-released twice since then, first as a bundled release with a special edition Nintendo DS with a new version called Nintendogs: Best Friends, and then again as Nintendogs: Dalmatian & Friends.

A Labrador Retriever Nintendog features in Brawl as an Assist Trophy. When summoned, the Nintendog will appear at regular size among the players, before jumping towards the screen and trying to play with the player. This will obscure a player's view of the stage.

Nintendog
A puppy for you to train on your Nintendo DS. They come in a wide variety of breeds, colors, coat styles, and personalities. You can train them, use dog toys to play with them, and feed them treats to establish a real link with your virtual pet. Other features include the ability to enter your dog in disc-catching contests and agility trials on obstacle courses.

Living Room: A stage based on Nintendogs + Cats appears in Super Smash Bros. for Nintendo 3DS. Various types of cats and dogs appear in the background. Building blocks and toys occasionally fall onto the arena and disappear later.

These are all of the trophies from the Nintendogs series. 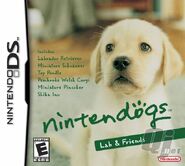 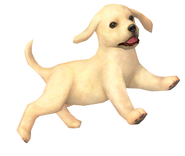 Official artwork of the Nintendog in Brawl.

The Nintendogs stage.
Community content is available under CC-BY-SA unless otherwise noted.
Advertisement