Nikki (ニッキー, Nikki) is the Mii mascot for Swapnote, a messaging service provided for the Nintendo 3DS family. She appears as an Assist Trophy in Super Smash Bros. Ultimate.

Nikki draws various creatures and objects on her Nintendo 3DS which ultimately come to life on the battlefield, acting as potential hazards. She can draw a giant Bullet Bill, Godzilla, an origami fan, and a Smash Ball. She has a more human design, rather than her Swapnote Mii appearance. 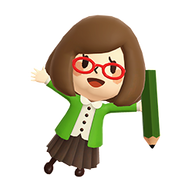 Nikki drawing a Bullet Bill.
Add a photo to this gallery
Retrieved from "https://supersmashbros.fandom.com/wiki/Nikki?oldid=586800"
Community content is available under CC-BY-SA unless otherwise noted.