Nia (ニア, Niyah) is the tritagonist of Monolith Soft's Xenoblade Chronicles 2, with her companion and Blade being Dromarch (ビャッコ , Byakko).

A Mii Fighter Costume modeled after Nia was made available as a part of the base game for Super Smash Bros. Ultimate. Both make a cameo on the DLC stage Cloud Sea of Alrest, which is a part of Fighters Pass Volume 2.

Nia is a Driver, with her paired Blade being Dromarch. Nia is a snarky, loud-mouthed, and cynical young woman, often putting down others' shortcomings. She is initially towards this to Rex and the party, but as the game progresses and she gets to know them all more, her relationship with them gets better and her sarcastic jokes become teasing banter. Dromarch, on the other hand, is far more astute and gentleman-like and shows respect to his peers. He looks and cares for Nia despite their wildly differing personalities.

They are first introduced as members of the salvaging group Torna, alongside Jin, Malos, and Rex. On the salvaging mission where Rex discovers Pyra, Nia and Dromarch defect from Torna after witnessing Jin stab him. They escape alongside Rex and Pyra on Azurda's back, eventually crash landing on the Titan Gormott after Azurda is gravely injured. In the town of Torigoth, Nia and Dromarch are apprehended by Mòrag and Brighid and the soldiers from the Empire of Mor Ardain as they have been branded as terrorists due to their affiliation with Torna, though Rex and Pyra rescue them and quickly make their way out of Gormott alongside Tora and Poppi α. Though she attempts to leave, Rex convinces her to stay with him for the remainder of the journey.

Sometime later, in the Spirit Crucible Elyps, Nia begins to show signs of fatigue similarly to Blades. She eventually begins to divulge her history prior to Torna to her fellow party members; Nia was originally born a Blade herself, with her Driver being the Lord of Echell in Gormott Province. She became close to the royal family, particularly with the Lord's daughter with whom Nia had a sisterly bond. However, the daughter became ill and the family soon became poor drifters after the Lord spends all of their wealth on a cure for her. She eventually died not long after; the Lord then makes Nia consume her body, turning her into a Flesh Eater - a subspecies of Blades that have been granted special abilities after fusing with humanoid cells. The Lord soon after dies, and Nia later finds a Core Crystal he possessed and resonates with it, becoming the Driver to Dromarch. The two spend some time wandering Alrest, eventually encountering Jin after he rescues them from the Indoline Praetorium, a group who hunt down Flesh Eaters, and join Torna soon after.

The party soon get ambushed by Phantasms in the Vault of Heroes; Rex tells Nia to stay true to herself, which convinces her to transform into her true Flesh Eater form. She thanks Rex for his help and confesses her feelings for him. In their mission to rescue Pyra in the Cliffs of Morytha, Nia briefly becomes Rex's Blade and work together to fight off Jin. She later uses her healing abilities to weaken Malos, allowing the party to kill him in the final battle at Elysium.

In the aftermath, Nia gives Rex encouragement to be with the revived Pyra and Mythra, having accepted his decision and feelings. If the player has completed New Game Plus, Nia can be seen accompanying the three in the game's title screen.

A costume for the Mii Brawler modeled after Nia is available in the base game and must be acquired separately in the Shop; the wig is available for 450G, while the outfit is 650G. 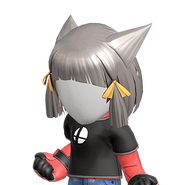 A Spirit of Nia is available in the base game. It is a Primary Shield Spirit under the Ace class. Their Spirit Battle uses a Mii Brawler wearing the Nia costume and is assisted by Incineroar, who is meant to be a stand-in for Dromarch as both are felines. The battle is a Stamina match and the Mii Brawler will be repeatedly healed during the course of the battle, a reference to Dromarch being a healer Blade. The stage is the Hazard-less form of Gaur Plain and the song that plays is "Battle!! - Xenoblade Chronicles 2". However, if the Pyra/Mythra Challenger Pack has been purchased, the song will change to "Gormott"; both the song and the stage make reference to the Gormott Province, Nia and Dromarch's homeland.

Both Nia and Dromarch have a random chance of appearing together in the background of Cloud Sea of Alrest.

Nia and Dromarch make an appearance in Pyra and Mythra's reveal trailer. In it, they send Rex off on his journey to find the girls, who have left without warning after receiving a Smash invitation.