New Pork City is a stage in Super Smash Bros. Brawl, hailing from the game Mother 3. It is a massive stage, approximately the size of the Temple stage in both Super Smash Bros. Melee and Brawl. It is comprised of dozens of buildings, giving the impression of a large city. However, the battle area consists of a series of platforms that seem to have no connection to the city itself.

The Ultimate Chimera is a hazard in New Pork City. Appearing randomly in any part of the stage, it walks slowly and its bite attack results in a One-hit KO and deals about 100% or 200% damage each bite. The Ultimate Chimera can only be defeated by destroying the makeshift bridge platform at the lower center of the stage when it walks over it, although it will return later in the match. Also, it is possible to tech the attack.

In Mother 3, The Ultimate Chimera is first seen in the Chimera Factory (in chapter 7) then appears in the Empire Porky Building in New Pork City (in chapter 8). When it sees or is near Lucas' party, it will pursue them. Engaging it in battle is useless as it will kill the party in one hit when it is engaged. The Ultimate Chimera still has an "off" button on his back, but the bird on its head will turn it back on when turned off in Mother 3, and is useless in Super Smash Bros. Brawl. 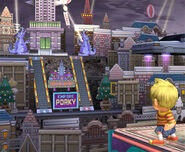 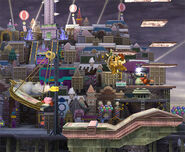 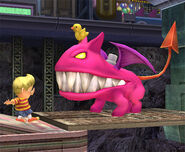 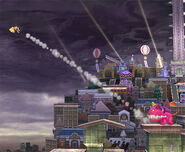 Retrieved from "https://supersmashbros.fandom.com/wiki/New_Pork_City?oldid=250265"
Community content is available under CC-BY-SA unless otherwise noted.