Ness (Super Smash Bros. for Nintendo 3DS and Wii U)

This article is about Ness's appearance in Super Smash Bros. for Nintendo 3DS and Wii U. For other uses, see Ness.

He currently ranks 28th on the tier list. This is due to his amazing aerial game, and combo ability. He has a large midair jump, with some okay KO options. He is also capable of reflecting and absorbing projectiles. However, his poor ground game and recovery prevent him from getting into a higher tier.

After completing either option, you must fight and defeat Ness in Magicant. In addition to unlocking Ness after you defeat him, you will also unlock Magicant for multiplayer use.

Ness is a Mix-Up and Half-Grappler type of character, excelling in varying his combo options through his versatile attacks and grabs.

Ness has a small hurtbox, making it easy for him to avoid some attacks. His ground mobility is sub-par when compared to the rest of the cast, but has high air acceleration, making it an essential part of his fighting style.

Ness possesses a very powerful aerial game, with all of his moves capable of spacing, setting up combos, or in extreme cases KO'ing opponents. All of them auto-cancel in a short hop, giving Ness many follow-up options. They also possess low startup and end lag, making them extremely useful for juggling opponents. His forward and neutral aerials grant Ness a useful move for approaches, while his back, down, and up aerials can be combo'ed and used to land KO's.

Ness's other strength lies in his powerful grab game. Because his moves can trap opponents easily, it makes it easier for Ness to grab the opponent, as they possess good speed and range. His pummel is extremely effective due to its fast pace and damage output. Ness's throws are arguably the most effective, as they possess good combo potential and high knockback, particularly his forward and back throws.

Ness's Special Moves play an integral part of his playstyle. PK Flash is an extremely effective edgeguard and KO option due to its high power and knockback. PK Fire possesses decent range and quick damage racking capabilities, and can be used for many of Ness's follow-ups. PK Thunder is Ness's most versatile move, as it can be used to knock opponents away or edgeguard them, or alternatively be guided into Ness to propel him forward, going a decent distance while inflicting high damage and knockback. Finally, PSI Magnet is one of the most effective self-healers in the game, as it covers both sides and can be used as a counter against energy-based projectile users.

Ness is held back by many flaws however. His ground mobility is sub-par, making it difficult to directly approach opponents. In addition, while Ness's ground attacks are effective in setting up combos, they are ineffective in directly dealing damage due to their short range and low knockback, with the exception of his forward smash. Finally, Ness's recovery can easily be gimped, as driving PK Thunder into an opponent immediately renders Ness helpless, making it dangerous against characters with multiple jumps; in addition, PK Thunder can also be cancelled with characters with projectile absorbers or reflectors, therefore completely negating any chance of Ness recovering.

Overall, players must be wary of opponents capable of fighting up close or negating projectile usage, as the presence of these fighters can easily make Ness an ineffective fighter. Rather, they should keep their distance, utilizing Ness's grab, throws, and projectiles to pressure opponents and set up many of his aerials to land KOs.

Ness has received major buffs, as well some few nerfs. Most notably, he no longer has extra frames from being grab-released. The changes in hitstun greatly grant Ness the benefit of comboing opponents more effectively. His Down and Up Smash attacks have greater utility, while his Forward Smash has greater knockback. However, his aerials deal less damage or have more landing lag, and his Special Moves have more ending lag.

Aesthetically, Ness's design is brighter, and has a more proportional and smaller head. Many of his attacks have new graphic effect. His voice is slightly higher-pitched than in Brawl.

Opinions on Ness' competitive viability has been controversial throughout the game's lifespan. During the early life of SSB4, players immediately noticed the buffs made to Ness. He was widely considered to be either a high, or even a top-tier character due to possessing arguably one of the best throw games in SSB4, a highly versatile aerial game, alongside excellent KO power and damage output. Ness's expectations remained strong, leading to great tournament representation and results, and securing the 13th position on the first official 4BR tier list. While his results slightly fell since the first tier list, as well as the release of Bayonetta, the significant buffs to Mewtwo and the increased representation of Mega Man having a strong impact on the metagame, he would drop slightly on the second tier list, placing at 16th.

However, Ness' flaws became more apparent as time passed, with players noting that his subpar mobility, mediocre ground game, and notably gimpable recovery made him struggle against high and top tiers, despite his buffs. As a result, opinions on Ness began to fall off drastically. His results would become stagnant, as many of his players became significantly inactive (Specifically after EVO 2016 to 2GGT: ZeRo Saga). Despite again gaining results on Winter 2016 and 2017, most noticeably FOW's 17th placement in 2GGT: ZeRo Saga and S1's 5th placement in B.E.A.S.T 7, it didn't compensate the loss of his stagnant results he had suffered from mid to late 2016. Some of his previously not so troublesome matchups such as Marth and Lucina would also gain a large spike in popularity and viability, and prove to now be worrisome matchups for Ness. This resulted in a much larger tier drop to 24th on the third tier list, this drop being tied with Pac-Man for the largest between the second and third tier lists.

Ness' ranking on the tier list became fair topic of debate due to several mains returning to the scene, with FOW briefly coming out of retirement to place 13th at 2GGC: Nairo Saga and 25th at 2GGC: Civil War respectively, NAKAT placing 3rd at Smash Factor 6, 13th at EVO 2017, 17th at GameTyrant Expo 2017, 17th at 2GGC: FE Saga, and 33rd at GENESIS 4 while mostly using Ness, The Great Gonzales placing 5th at Royal Flush and 17th at Smash 'N' Splash 3 respectively and, most recently, a Japanese Ness player, Gackt, placing 17th at The Big House 7, claiming wins against ANTi, Locus, and Mistake (although lost to Raito by 2-3). Regardless of these improved results, Ness dropped once again on the fourth and current tier list, at 28th, now sharing the spot with his Earthbound represenative Lucas, though due to the expansion of the tiers, he is now considered a high tier character rather than a mid tier character. To this day, Ness' tier placement remains a large topic of debate.

Hailing from Onett, a small town in Eagleland, this young boy's ordinary looks hide his psychic powers. Ness fought against the evil Giygas in Earthbound, and in Smash Bros. he unleashes some of the same PSI moves. Watch out for PK Thunder, a guided attack that can also launch Ness like a rocket!

Ness may have psychic powers, but that doesn't mean he shies away from getting physical. His side smash packs a real punch if you hit enemies with the end of his bat, and it can even deflect projectiles! His up and down smashes also have a lot of range - Ness can land his strikes with ease!

In EarthBound, this PSI ability belonged to Poo, the Crown Prince of Dalaam and one of Ness's friends. Ness must have learned it especially for Smash Bros.! The attack makes a shower of meteors fall onto the stage, damaging any foes it hits. While the attack's in progress, Ness is invincible and can adjust the meteors' trajectory.

Ness holding a yo-yo in his hand.

Ness performing a Side Taunt near a Mr. Saturn.

Ness on the Battlefield stage

Ness running across the Magicant stage

Ness performing an Up Taunt next to the Onett message board.

Ness attempting to use his Side Special to interrupt Sonic's Spin Dash.

Ness performing a Side Taunt with a Mr. Saturn walking on his bat, along with Kirby look upwards in a suprised way.

Ness performing a Side Smash Attack against Captain Falcon. 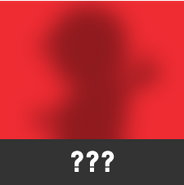 Ness as he appears in the Official Website. Note that his image can't be seen well, since he is a secret character. 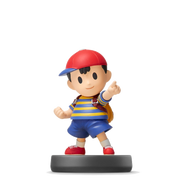