This page is about Ness's appearance in Super Smash Bros. Melee. For the character in other contexts, see Ness.

Makiko Ōmoto
Ness (ネス, Ness) is a starter character in Super Smash Bros. Melee. Being confirmed as a veteran fighter at E3 2001, he was originally planned to be replaced by Lucas from Mother 3. The final cancellation of Mother 3 on the Nintendo , however, caused Masahiro Sakurai to retrieve Ness.

He is currently ranked 23rd in the D tier. While still having fantastic throws and a great aerial game due to his double jump cancel, Ness has a poor approach on the ground and in the air due to significant range issues in most of his attacks; his recovery is also easy to intercept and edge-guard against, and he also has significant trouble KOing opponents, again owing to his poor range. As a result of these significant weaknesses, Ness has terrible matchups with six nearly unwinnable, one even (against Yoshi), and only three slightly favorable (against Bowser, Kirby, and Pichu). 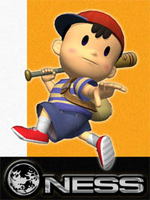 Ness is a character known for his good Aerial Attacks, overall bad priority, and a variety of projectiles. His Forward Throw is good for knockback. His Back Throw is the strongest in the game. His Up and Down throws are good for setting up combos. However, Ness's standing grab range is the second shortest (next to Pikachu), and his running grab the shortest, which means his throws are usually unused in battle.

His Aerial Attacks are good for comboing, KOing, and edgeguarding. Ness's Down Aerial is a Meteor Smash with decent range, but it's slow. Three out of four of Ness's Special Moves are projectiles. However, they are overall slow and have various amounts of cooldown time and start-up lag with them. Additionally, each one has very limited use, making them all situational, with an exception to PK Thunder, which is good for edgeguarding, juggling, and mindgames.

Ness has fairly slow dash speed, but his fast, although short wavedash can help this problem. Ness also has an effective (as well as the lowest) double jump cancel. Ness's main form of recovery is PK Thunder 2. When mastered, this covers great distance and is very powerful (and having a large sweetspot range and very high second jump also helps his recovery). However, it takes great amounts of precision to angle in certain instances, and Ness is extremely vunerable while his PK Thunder is out; because if it is hit by a high priority projectile or the opponent, Ness will fall into a helpless state.

Ness was overwhelmingly nerfed in his transition from Smash 64 to Melee, despite being ranked 10th on the Smash 64 Tier list. His nerfs significantly counter the various buffs he received, with his nerfs impairing his already-poor recovery, and significantly reducing his KO options. As a result, Ness has a lower tier placing in Melee; while already placing in the low tier of Smash 64, Ness is currently bottom tiered in Melee, and he is now regarded as non-viable in tournaments.

In addition to the normal trophy about Ness as a character, there are two trophies about him as a fighter, unlocked by completing the Adventure and All-Star modes respectively with Ness on any difficulty.

Ness (Smash Red)
The key to mastering Ness is controlling his unique midair jump, which makes up for what he lacks in speed. His PK Flash attack may seem weak at first glance, but it grows more powerful the longer you hold down the B button. To do a lot of damage with PK Fire, try to burn your opponent as many times as possible.

Ness (Smash Blue)
Ness's mind is his best weapon. PK Thunder is a PSI missile weapon that can be guided using the Control Stick, and if Ness hits himself with it, he turns into a living missile capable of doing massive damage. This move can also be used for recovery. PSI Magnet turns energy missile attacks into health; try out certain Pokémon for stamina replenishment.