Official artwork of Ness from EarthBound.

In EarthBound, Ness is a courageous boy, from the fictional town of Onett located in north-western country of Eagleland. He possesses strong psychic powers called Psychokinesis (hence the abbreviation PK, which is called PSI in the American adaption), and in the year 199X, utilizes his abilities to defeat a vengeful alien known as Giygas (although Giygas's motivation for revenge is only known from playing Mother). He is the successor of Ninten, the star of the original Mother(localized as "EarthBound Beginnings"), the game in the MOTHER series before EarthBound and the first out of the trilogy. Some say Ninten and Ness are identical; however, the games take place in different settings, and there are several differences between the two boys. (Ninten knows no offensive PSI attacks, for example.)

Among many weapons, Ness wields slingshots, yo-yos, and most famous of all, Ness' signature baseball bat. Ness is also a master of the psychic powers called PSI, and knows PSI attacks like PSI Flash, PSI Rockin', PSI Shield, Lifeup, Healing, Hypnosis, Paralysis and Teleport. Paula and Poo's moves (PK Fire, PK Thunder, PSI Magnet, and PK Starstorm) would be borrowed by Ness for combat in the Super Smash Bros. series.

Ness was a bit of surprise addition to the roster for the original Super Smash Bros. Many players had never expected such an obscure character to turn up in the game, which seems to be reflected in-game, as he is a secret character, unlocked by completing the 1P Game on a difficulty of Normal or higher, with three lives or less and using no continues.

Strangely, none of Ness' Special Moves are his own; the PSI Magnet, PK Fire and PK Thunder, (B + Down, B and B + Up, respectively), were originally used by his ally Paula in EarthBound. A possible explanation for this discrepancy is offered in the sequel to this game, Super Smash Bros. Melee, which states that Paula may have taught him these techniques to use in battles.

Ness was a seemingly-average kid from Onett, but in truth, he was destined for much more. When a strange meteorite landed near his hometown, the little boy with psychic powers set out to save the world. Little has been said of Ness' character, and much remains hidden.

Ness returns in Super Smash Bros. Melee as a default character this time around.

When Melee was in development, Ness wasgoing to be cut as a playable character and replaced with Lucas, the protagonist of Mother 3. However, as a result of the constant delay and eventual cancellation of Mother 3 on the Nintendo 64, Ness was retained as a veteran fighter.

He keeps all of his old special moves and, as all other veterans, gains a fourth and new one: PK Flash, which is assigned as his neutral B attack. PK Flash is Ness' first "true" special attack, as his other two offensive moves were not used by him in EarthBound. PK Fire was also changed to Ness' Side Special.

Unlike Captain Falcon, who also made the transition from unlockable to default without being affected much, Ness appears to have been "nerfed"; that is, his fighting ability has been decreased, making him a much lower-quality character, much to the dismay of Ness fans.

Ness [Smash]
The key to mastering Ness is controlling his unique midair jump, which makes up for what he lacks in speed. His PK Flash attack may seem weak at first glance, but it grows more powerful the longer you hold down the B button. To do a lot of damage with PK Fire, try to burn your opponent as many times as possible.

Ness [Smash]
Ness's mind is his best weapon. PK Thunder is a PSI missile weapon that can be guided using the Control Stick, and if Ness hits himself with it, he turns into a living missile capable of doing massive damage. This move can also be used for recovery. PSI Magnet turns energy missile attacks into health; try out certain Pokémon for stamina replenishment. 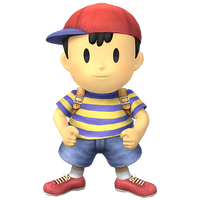 Ness returns in Brawl as a playable character. Unlike Melee, he is reverted back to an unlockable fighter. He can be unlocked by playing 5 VS Matches or by reflecting 10 projectiles. In this game, Lucas now joins Ness upon the eventual release of Mother 3 on the Game Boy Advance in 2006.

On January 20, 2008, Edible, a GameFAQs member, made a topic in the site's Brawl message board about an official trailer on the Japanese Wii website that apparently confirmed Ness (as well as Lucario and Jigglypuff) as playable characters in the game. In this screenshot taken of the video, a Ness icon can clearly be seen in the lower right hand corner when the Claus sticker is selected, suggesting that Ness was returning in playable form. The video in question can be viewed here.

The intro for Brawl features Ness, reaffirming the fact that he is playable in-game. He was a default character in Melee, but back as an unlockable in Brawl. Ness was revealed to be a confirmed playable character in Super Smash Bros. Brawl on February 1st, 2008, the day after Brawl came out in Japan.

Ness
An average boy whose life changed when he found a meteor and an alien on a nearby mountain. The alien warned him of a future threat, and adventure ensued. He can use energy known as PSI and also wields a bat and yo-yo. This brave youth gives his all to defeat the evil Giygas. 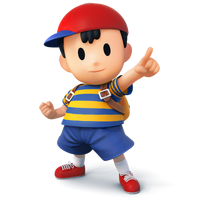 Ness appears as a playable character in Super Smash Bros. for Nintendo 3DS/Wii U, being unofficially revealed due to a live stream made from people who received Super Smash Bros. for Nintendo 3DS early. He was then officially confirmed for both versions on the 6th of October, after Nintendo released screenshots of him, alongside Falco and Wario. As he remains an unlockable character in the Nintendo 3DS version, he is a starting character on the Wii U version. He now sports an updated appearance along with receiving newly recorded voice clips.

Ness
Hailing from Onett, a small town in Eagleland, this young boy's ordinary looks hide his psychic powers. Ness fought against the evil Giygas in Earthbound, and in Smash Bros. he unleashes some of the same PSI moves. Watch out for PK Thunder, a guided attack that can also launch Ness like a rocket!

Ness (Alt.)
Ness may have psychic powers, but that doesn't mean he shies away from getting physical. His side smash packs a real punch if you hit enemies with the end of his bat, and it can even deflect projectiles! His up and down smashes also have a lot of range-Ness can land his strikes with ease!