Needle Storm is the name of Sheik's Neutral Special Move. When B is pressed, Sheik will throw a slim, almost-invisible needle to attack. They can either travel straight or at an angle (roughly 45 degrees towards the ground), depending on whether Sheik is in the air or not. The B button can be held to add up to 5 more needles, and the needles can be saved for a short time later by pressing the shield button or the grab button. 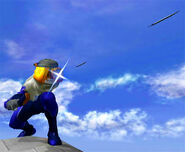 Sheik unleashing Needle Storm in the air in SSBB.
Add a photo to this gallery

Paralyzing Needle
Add a photo to this gallery

Retrieved from "https://supersmashbros.fandom.com/wiki/Needle_Storm?oldid=472818"
Community content is available under CC-BY-SA unless otherwise noted.