Nayru's Love is Zelda's Neutral Special Move. A large blue crystal forms around Zelda, which then splits into tiny blue crystals that spin around her. It can do several hits of damage and also reflect projectiles. Using it in mid-air slows Zelda's descent, though very slightly.

This attack will reflect any and all projectiles, similar to Fox's Reflector. However, unlike most other reflectors, there is a moderate amount of downtime after the move is used during which it will not reflect projectiles. This makes timing Nayru's Love important, as Zelda may be hit by projectiles if she uses it too early.

The hitboxes from the shards tend to draw characters towards Zelda, with the exception of the outermost shards. This means that as long as the centre of the opponent is between Zelda and the outermost shards, this attack will rack up 13% damage, making it one of the most damaging reflectors when used as a direct attack. The attack can also rack up to 15% damage, but the opponent must be hit from Zelda's back, pushing them towards her. 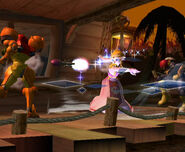 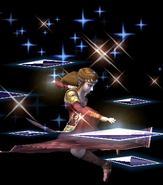 Nayru's Love reflecting the blast from a Super Scope in Brawl.
Add a photo to this gallery

Nayru's Rejection is one of Zelda's Standard Special moves that can be used via customization. This move spins opponents around instead of hitting them.

Nayru's Rejection is a custom variation of Nayru's Love that works similarly to Mario's Cape in that it will not only reflect projectiles but will turn opponents around when they are hit by it. The move deals less damage and doesn't have the smaller crystals revolving around the larger crystal, giving the move less range. The move turns opponents around and its low knockback makes it easy to integrate into combos since it can easily mess up an opponent's DI and combos into side tilt, jab, side smash attacks, down tilt, and down smash attack. It also makes for a good KO set-up since the smash attacks will be deadly at higher percentages. Also like Mario's Cape, it can be an edge-guarding tool, turning recovering opponents away from the edge.

Nayru's Passion is one of Zelda's Standard Special Moves that can be used via customization. This move pulls in opponents and deals fire damage. Won't reflect projectiles.

Nayru's Passion trades defense for offense. It will not reflect projectiles but will instead pull nearby opponents towards Zelda and then launch them away with an explosion. The explosion deals good damage and high knockback; the move is useful as a combo finisher because of this but is poor for integration in the middle of combos because the high knockback makes it difficult to combo the move into any other moves. The move is executed quite fast as well.

Nayru's Passion.
Add a photo to this gallery

The attack is based on the Nayru's Love spell in The Legend of Zelda: Ocarina of Time. Link would use it to create a large blue crystal around himself that made him invincible to damage, yet still get knocked back from strong attacks. It is the spell which is representative of Nayru, the Goddess of Wisdom. Unlike Zelda's version, it could not be used offensively. Link does not have this attack in any Super Smash Bros. games, despite it being his.

Retrieved from "https://supersmashbros.fandom.com/wiki/Nayru%27s_Love?oldid=572730"
Community content is available under CC-BY-SA unless otherwise noted.