Names are a feature in Super Smash Bros. Melee, Super Smash Bros. Brawl, and Super Smash Bros. for Wii U. It allows a player to input a short string of characters as a name to use in gameplay, where it will "float" above the character. In Brawl, the string can be up to five characters long, whereas Melee allows only a max of four characters. In Super Smash Bros. for Wii U, names can have up to ten characters. A name will have its own records for things such as KOs, self-destructs, damage taken, pratfalls, etc., which can be seen in the Records menu. Names can also be used to set Rumble on a controller and save a control preference for a player that uses different controls to the default setting. In Brawl, names can be transferred to the Wii Remote and can then be transferred to another Wii console. KO Stars are temporarily awarded to a given name profile for scored KOs, lasting until the player exits Versus Mode or changes his/her name.

In rare cases, names may affect gameplay. For example, in Melee, name tags remain visible even if they are pointing to an invisible character, making it easier to punish teleportation special moves such as Farore's Wind and Vanish.

In Super Smash Bros. for Wii U, due to the lack of voice chat when playing any of the With Anyone modes online, some players use names as a means of communicating with other players, sending messages such as "good game".

The Name Entry is a menu where names are entered and managed. In Melee, it is found in the Vs. Mode menu, while it is found under "Options" in Brawl; in Super Smash Bros. for Wii U, it can be found in both places. New names can also be typed in at the character selection screen, although in Melee, it will shift screens to a name entry screen; in Brawl and Super Smash Bros. for Wii U, a new name may be typed in directly, although controls cannot be set this way.

There is also an option to have the game enter a random name. Most of the random names that can appear are names of existing Nintendo characters.

The Name Entry will refuse to set names such as "CPU" and "P1", likely due to them being tags for players without names. However, variations with lowercase letters, such as "Cpu" and "p1", can be set. In Super Smash Bros. for Wii U, in addition to this, the Name Entry uses the Wii U's native word filter, preventing names with potentially inappropriate jargon from being set, unlike in Melee and Brawl. 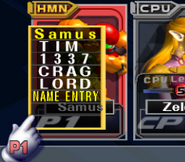 Selecting a name prior to a match in Melee. 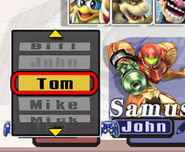 Selecting a name prior to a match in Brawl. 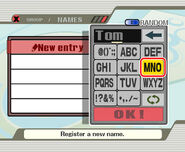 The name entry screen in Brawl.
Add a photo to this gallery

Retrieved from "https://supersmashbros.fandom.com/wiki/Name?oldid=545214"
Community content is available under CC-BY-SA unless otherwise noted.