Munchlax (ゴンベ, Gonbe in Japanese versions) is a fictional creature in the Pokémon media franchise. Its final evolution, Snorlax, has appeared in all four Super Smash Bros. series games. Munchlax is voiced by Jimmy Zoppi.

Munchlax is one of the Pokémon that appears out of a Poké Ball. When summoned, it wanders aimlessly around the stage, eating any items it finds, excluding Poké Balls and Smash Balls. If there aren't any items around for it to gobble up, Munchlax is effectively useless like Goldeen. Also, if you take an item just before Munchlax can eat it, Munchlax will sit on the ground and cry for a short period. Munchlax also has the ability to eat a smart bomb if it has been only recently exploded.

As a Trophy
A Big Eater Pokémon. It's normally a slow-moving creature, but when it spots food, it moves surprisingly fast. It's native to the Sinnoh region and can be lured out by coating certain trees with sweet honey. Once it's attached to its Trainer, it will level up and evolve into Snorlax. 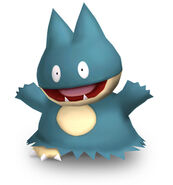 Munchlax's Trophy.
Add a photo to this gallery
Retrieved from "https://supersmashbros.fandom.com/wiki/Munchlax?oldid=547279"
Community content is available under CC-BY-SA unless otherwise noted.