Mr. Saturn as it appears in Super Smash Bros. for Nintendo 3DS and Wii U.

Mr. Saturn (どせいさん, Dosei-san) is an item that appears in Super Smash Bros. Melee, Super Smash Bros. Brawl, Super Smash Bros. for Nintendo 3DS and Wii U, and Super Smash Bros. Ultimate. He is a light flesh-tone colored alien with whiskers, a large nose, thick eyebrows, and a single hair with a bow. He walks around the stage pushing other items along with it and can break shields very easily. He also cries when he makes contact with an opponent. If thrown, it deals very little damage and knockback, but can be used repeatedly, as he does not disappear after one use. Mr. Saturn gives off a large amount of stun when it hits an opponent, making it great for combos. In Super Smash Bros. Melee, there are various bonuses related to Mr. Saturn. It also breaks the shield of any character who is hit by one being thrown.

Mr. Saturn are a species in EarthBound and Mother 3. They are strange, possibly extraterrestrial life forms who reside in both Eagleland's Saturn Valley and the Nowhere Islands' Saturn Valley in EarthBound and Mother 3, respectively. They are characterized by huge noses, four whiskers, and a single hair with a small red bow. They are generally very peaceful and generous, offering free stays at the hotel and coffee. They speak Saturnian (composed of odd looking English letters), and erratically use the words "boing," "ding," and "zoom" at the end of their sentences. The Japanese font is said to be inspired by the handwriting of the young daughter of EarthBound's designer, Shigesato Itoi.

The origins of the Mr. Saturn race are unknown. But many believe that they come from outer space. They are found in Saturn Valley and speak their own unique language. In Super Smash Bros. Melee, Mr. Saturn is just another item with which to pelt foes. These guys are laid back and not into fighting, so you can rest easy... or can you?

A creature from a race of unknown origin that speaks its own unique language. Some say they came from outer space, but the facts behind their appearance are wrapped in mystery. In Smash Bros., they'll wait a bit after appearing before wandering off on their own. They can be picked up and thrown at foes for minimal damage. Their shield-breaking properties are high.

Mr. Saturns are curious beings that speak their own language. They may not look it, but they're scientific geniuses! In this game, they tend to go for a stroll around the battlefield. Throwing one at an enemy won't do much damage, but Mr. Saturn will take out a shield very easily.

A picture from the 2007 Tokyo Game Show where Mr. Saturn can be seen being hit by Snake's Home-run Bat. 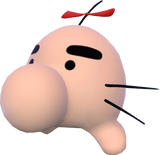