Animal Crossing
Mr. Resetti (リセットさん, Risetto-san) is a character in the Animal Crossing games. In all four games, he would appear whenever the player walked out their house after they turned the power off without saving. Mr. Resetti would bother the player about how "resetting" the game is bad. He wouldn't stop annoying the player until the player apologized. Sometimes though, apologizing wouldn't be enough for Mr. Resetti and he would keep shouting and sometimes make the player say a phrase like "I'M DIRT!" or something similar. He also sometimes gives a code that has to be typed correctly.

He appeared as a trophy in Super Smash Bros. Melee. Because the only installments in the Animal Crossing series that had been released at the time were the Japan-exclusive Dobutsu no Mori and Dobutsu no Mori+, Mr. Resetti's first appearance is listed on his trophy as "Future Release".

Mr. Resetti
Prepare to receive a really long talking-to if you reset this game: the next time you play, Mr. Resetti will be waiting to deliver his best scolding. No matter what your intentions are, pressing the RESET Button will bring you face-to-face with this fervent character. Sometimes the only way to shut him up is to apologize. 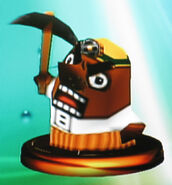 He also makes an appearance in Super Smash Bros. Brawl as an Assist Trophy, where he simply sits where he was released and lectures the players with long monologues that can last for over a minute before leaving with his signature "SCRAM!". His large text boxes obscure a large section of the upper playing field, which can be distracting to fighters, or the lower area of the screen (depending on his position), obscuring the damage meter. He will respond to certain events, such as him falling off the playing field or on moving stages, where he will say, "H-hey! Don't you ditch me punk!". Depending on the actual time of day, Mr Resetti may make a comment (For example, at night-time, Mr. Resetti tells players to "Get some shut-eye", adding that "Staying up late is for punks".

He will also do impressions of players on the field (calling them by their player name if those are being used, and usually their win screen taunt). It's possible to interact with him by attacking him, but doing so only adds to his complaining. He will also block projectiles that are thrown at him. Also, he can occasionally explode when attacked enough by players. Mr. Resetti's text box will be visible regardless of the camera position, and even shows up on Snapshots.

Mr. Resetti
A mole wearing a hard hat who'll show up when you restart your game without having saved. He pops up and lets you know in no certain terms the importance of saving your game. The problem is, his speeches are entertaining enough to warrant breaking the rules at least once. In Animal Crossing, his brother Don appears too. He's the polar opposite of his sibling.

A character who normally appears from underground to lecture the player. However, he is not always underground--in Animal Crossing: Wild World, he can be found sipping coffee at The Roost if you go at a certain time on a certain day. In the Japanese-only "e+" version, he works at a so-called "Resetti Observation Center" where you can pop in for a visit. 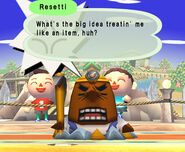 By entering a match with only one player by means of hacking and getting Resetti out of an Assist Trophy, Mr. Resetti is forced to say his own name instead of the nonexistent second player's name, in the sentence "[Player 1].... [Player 2].... You'd be runnin' home to Mama!". The glitched message will appear as "[Player 1].... Resetti.... You'd be runnin' home to Mama!".[1] Presumably, "Resetti" is the next string in memory at the time after the player names.

In Super Smash Bros. for Wii U and 3DS

Be sure to save your game before you turn it off, or this guy will show up screaming "AAAAAAAARGH!" Sonny Resetti and his favorite brother, Don, keep an eye out for sudden game resets, and they aren't shy about reminding you to save often. Best not to aggravate them needlessly...