Mr. Game and Watch is a playable character in Super Smash Bros. for Nintendo 3DS and Wii U. Visually, Mr. Game & Watch has received a slight re-design much more noticeable than the transition between Melee and Brawl. His arms and legs are slightly thinner, and his hands, nose and feet are somewhat rounder. His ankles are also connected to the end of his feet as opposed to the middle of them. These visual changes give his body a smooth appearance.

After completing either option, you must fight and defeat Mr. Game & Watch in Flat Zone 2.

After completing either option, you must fight and defeat Mr. Game & Watch in Flat Zone X.

Mr. Game & Watch received both buffs and nerfs that balances him overall.

NTSC: Game & Watch was a series of handheld video games that started in 1980, which pretty much makes Mr. Game & Watch the father of the Game Boy and Nintendo DS. Or maybe an older sibling? Anyway...in Smash Bros., Mr. Game & Watch uses distinct retro moves to damage his foes. However, he only has two dimensions, so he's pretty easy to send flying.

PAL: Game & Watch was a series of handheld video games that started in 1980, before even the Game Boy. In this game, you can play as the guy who starred in them, moving about in his quirky oh-so-retro little way. He can string together some pretty powerful attacks but, unfortunately, being 2D makes him very easy to launch.

Mr. Game & Watch's Oil Panic special catches shots and turns them into oil. After catching three, the bucket will be full and you'll be able to throw oil all over your enemies. Some shots, like Samus's fully powered Charge Shot, will fill the bucket in one go! Throwing the oil you get from a shot like that and KO your foes in a flash!

No scrolling, only one stage, only a few sounds, and the age of 3D was nothing more than a twinkle in someone's eye. Nevertheless, this game was a blast at the time. In the Game & Watch title Manhole, you move a manhole cover back and forth so that the pedestrians can safely cross the road. What a simple yet fun game! 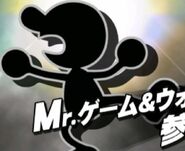 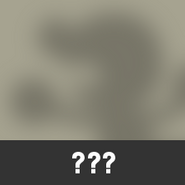 Mr. Game & Watch as he appears in the Official Website. Note that his image can't be seen well, since he is a secret character.

Retrieved from "https://supersmashbros.fandom.com/wiki/Mr._Game_%26_Watch_(Super_Smash_Bros._for_Nintendo_3DS_and_Wii_U)?oldid=494870"
Community content is available under CC-BY-SA unless otherwise noted.