No
Mr. Game & Watch (Mr. ゲーム＆ウォッチ, Mr. Game & Watch) is a secret character in Super Smash Bros. Melee. He was designed as a composite representation of various generic characters featured in the Game & Watch series, created by Gunpei Yokoi in 1980. He is the last character to be unlocked in the game.

Mr. Game & Watch is currently ranked 19th in Melee's tier list. While he has a few good moves, he has slow overall speed (outside of his high horizontal lateral movement), and he is predictable. Additionally, only his down and forward aerials can L-cancel, which can be a major problem in high level play. He is also easy to KO since he is very lightweight, and suffers high periods of hitstun, which is also truly problematic in high level play. His shield doesn't cover his entire body either, leaving him very vulnerable. He also has very bad overall matchups against the majority of the cast (although some are advantageous or even).

When fighting Mr. Game & Watch, he will be fought at Flat Zone. 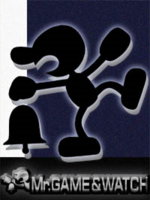 Mr. Game & Watch has fast, high-priority Aerial Attacks coupled with large, disjointed hitboxes. This allows him to combo fairly well, especially against fast fallers. However, his Back Aerial, Up Aerial, and Neutral Aerial cannot be L-canceled.

He has strong finishers, a powerful aerial game, and one of the highest vertical recoveries in the game, but it is predictable, and it can be difficult to sweetspot the ledge with. His Oil Panic can also catch energy projectiles. He can use his low duck to avoid physical projectiles. His grabs also have a very similar animation, which means it's hard to tell which way he will throw an opponent. Also, all of his throws can chain grab.

However, Mr. Game & Watch's Tilts and Smashes are choppy and easy to predict, while his slow roll and sidestep cripple his defense. His shield leaves his head exposed, which invites shield stabbing. As mentioned above, he is very lightweight, making him easy to be juggled and KO'd, and he is easily comboed despite his light weight, due to the long amount of hitstun he suffers. His movement is choppy and sluggish, thus he is dependent on wavedashing and dash-dancing as his primary method of movement.

Mr. Game and Watch players must therefore be able to read their opponents ridiculously well in order to simply survive and to have a chance in competitive play.

In addition to the normal trophy about Mr. Game & Watch as a character, there are two trophies about him as a fighter, unlocked by completing the Adventure and All-Star modes respectively with Mr. Game & Watch on any difficulty:

Mr. Game & Watch
First appearing in 1980, the Game & Watch series is the father of all portable liquid crystal games. The main character is simple and monochrome but has a timeless individuality. There are 39 different games in the series and they've sold over 43 million units worldwide. Pictured at left is the particularly popular Fire model.

Mr. Game & Watch (Smash Red)
A resident of a totally flat world, Mr. Game & Watch's frame-by-frame movements is distinctive. His image is known far and wide, and respected by gamers everywhere. In Super Smash Bros. Melee, he hurls sausages with his Chef technique. The random strength of his Judgement is determined by the number displayed; food appears on lucky 7.

Mr. Game & Watch (Smash Blue)
A man of great stature in the world of Nintendo characters, Mr. Game & Watch is a comparatively light fellow and doesn't feature many powerful attacks. When he's in danger of falling, Fire calls out a rescue brigade to send him skyward once more. He can also catch missile weapons with Oil Panic; once he's caught three, he can dump the bucket on his foes. 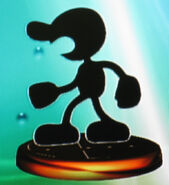 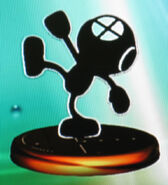