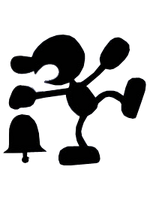 Mr. Game & Watch makes his Smash-series debut as the final unlockable character in Melee. Mr. Game and Watch can be unlocked one of four ways: completing either Classic or Adventure with all characters on any difficulty and stock or the Target Test with all characters, or playing 1000 vs. mode matches.

Mr. Game & Watch fights with a variety of items derived from the Game & Watch series. Chef, his B-move, launches bacon at random distances from a pan. At closer distances, this pan can be used as a pseudo spike; Judgment, his Side-B, is a hammer with randomly chosen strength and effects, ranging from weak (1) to strong (9); Fire, his Up-B, launches Mr. Game & Watch at a lengthy vertical distance, with the help of a firefighter team (note that this is the only one Up-B attack which gets more distance when a character is big by getting a mushroom); Oil Panic, his Down-B, allows him to catch energy-based projectiles. Once three projectiles were caught, the contents can be dumped as a flow of oil, causing damage depending on the projectiles caught. This move can be used to cause the Kamikaze Glitch.

As with the other playable characters, Mr. Game & Watch has three collectible trophies.

Mr. Game & Watch
First appearing in 1980, the Game & Watch series is the father of all portable liquid crystal games. The main character is simple and monochrome but has a timeless individuality. There are 39 different games in the series and they've sold over 43 million units worldwide. Pictured at left is the particularly popular Fire model.

Mr. Game & Watch [Smash]
A resident of a totally flat world, Mr. Game & Watch's frame-by-frame movements is distinctive. His image is known far and wide, and respected by gamers everywhere. In Super Smash Bros. Melee, he hurls sausages with his Chef technique. The random strength of his Judgement is determined by the number displayed; food appears on lucky 7.

Mr. Game & Watch [Smash]
A man of great stature in the world of Nintendo characters, Mr. Game & Watch is a comparatively light fellow and doesn't feature many powerful attacks. When he's in danger of falling, Fire calls out a rescue brigade to send him skyward once more. He can also catch missile weapons with Oil Panic; once he's caught three, he can dump the bucket on his foes. 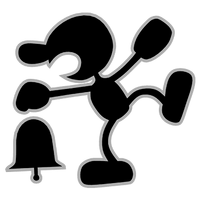 Mr. Game & Watch returns as an unlockable character in Super Smash Bros. Brawl. While his moveset seemed mostly unchanged from Melee, he has been heavily buffed overall, moving from the bottom tier in Melee to the mid-high tier in Brawl. Additionally, he now a new Final Smash.

The monochrome hero of the Game & Watch series, a fellow who oozes personality. First appearing in 1980, the series was the original portable game systems. The first games in the series were quite simple, but as time passed, technology evolved. The multiscreen series featured gameplay on dual screens. As the name states, the games also kept time. 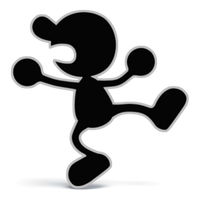 Mr. Game & Watch once again returns as an unlockable playable character. Prior to his official reveal, he was teased by making a small appearance at the end of Pac-Man's reveal trailer to illustrate how the two are the oldest characters in Smash Bros. history.

Mr. Game & Watch has gotten a Nerf in his transition to SSBWU/3DS as most of his attacks contain more lag and can no longer auto cancel his aerials. To compensate, some of his attacks now deal more damage. Additionally, his throws have also improved, as they are all now performed much faster, with his down throw being especially great at starting combos.

Mr. Game & Watch
Game & Watch was a series of handheld video games that started in 1980, which pretty much makes Mr. Game & Watch the father of the Game Boy and Nintendo DS. Or maybe an older sibling? Anyway...in Smash Bros., Mr. Game & Watch uses distinct retro moves to damage his foes. However, he only has two dimensions, so he's pretty easy to send flying.

Mr. Game & Watch (Alt.)
Mr. Game & Watch's Oil Panic special catches shots and turns them into oil. After catching three, the bucket will be full and you'll be able to throw oil all over your enemies. Some shots, like Samus's fully powered Charge Shot, will fill the bucket in one go! Throwing the oil you get from a shot like that can KO your foes in a flash!

Mr. Game & Watch returns once more as a playable fighter in Super Smash Bros. Ultimate. His moveset has received a major overhaul, not only looking closer to it's original games, but getting some big changes as well. His forward aerial has been replaced from a box to a bomb from Mine Sweeper, Game and Watch takes out the bomb and it falls, exploding on impact with the ground or enemy. His upward aerial now functions differently, being more similar to Megaman's and being a projectile.

Retrieved from "https://supersmashbros.fandom.com/wiki/Mr._Game_%26_Watch?oldid=597867"
Community content is available under CC-BY-SA unless otherwise noted.