Depending on the pressure applied to the control stick, Samus will fire one of two types of missiles: 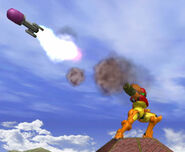 The Super Missile in Melee.

The Super Missile in Brawl.

The Homing Missile in Brawl, which can be used when applying only slight pressure to the control stick.
Add a photo to this gallery

The missiles are projectiles used in all Metroid games. Once Samus finds a Missile Launcher, she can fire Missiles at any time, provided she has ammo remaining. Since Missiles do more damage than most Beam weapons and are the only way to access certain areas and damage some enemies, collecting Missile Expansions to increase ammo space is critical. There are different type of Missiles available, such as Ice Missiles.

Homing Missiles appeared in Metroid Prime as the standard for most missile types. Though, Super Smash Bros. Melee was released before Metroid Prime, meaning that the Homing Missile was new to Melee. From Metroid Prime 2: Echoes onwards, Samus could collect an upgrade called the Seeker Missile, which allowed her to fire up to five missiles at five targets.

Retrieved from "https://supersmashbros.fandom.com/wiki/Missile?oldid=387788"
Community content is available under CC-BY-SA unless otherwise noted.