Min Min is a downloadable character for Super Smash Bros. Ultimate as the first fighter in Fighters Pass Volume 2. The announcement of an inclusion of a character from ARMS was made on March 26, 2020 during the Nintendo Direct Mini before her proper reveal on June 22, 2020 during a presentation from Masahiro Sakurai.

A lot of Min Min's moveset is largely unknown, but this is what has been shown in her reveal trailer and Sakurai's demonstration afterwards.

Classic Mode: ARMS at the Ready

The song "ARMS Grand Prix Official Theme Song" will play during the credits. 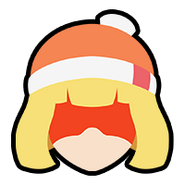 Min Min with Spring Man in the Spring Stadium stage.
Add a photo to this gallery

Retrieved from "https://supersmashbros.fandom.com/wiki/Min_Min_(Super_Smash_Bros._Ultimate)?oldid=593874"
Community content is available under CC-BY-SA unless otherwise noted.