The default "male" Mii for the Wii.

Mii Plaza
A Mii is a digital avatar that players can create on Nintendo's later consoles to use on certain Nintendo games. Miis were introduced for the Wii alongside the system's launch late in 2006, and have since continuously appeared for use on the Nintendo 3DS, Wii U, and even certain Nintendo DS titles. Miis get their name from the word "me", in the same way that the Wii gets its name from "we". Miis often make cameo appearances—playable or not—in Nintendo games and are sometimes the focal point, such as softwares like Find Mii and the Tomodachi series. They appear as playable fighters in Super Smash Bros. for Nintendo 3DS and Wii U and Super Smash Bros. Ultimate.

Miis debuted along with the Wii in late 2006. They can be created using the Wii's Mii Channel application, with users able to customize many aspects of their appearance and facial features, such as their height, hair style, eye color, and so on. Once created, Miis act as avatars for players in a variety of titles, including Wii Sports, and as a way of keeping track of individual players' scores. Miis saved onto a console are also capable of appearing as NPCs in games, such as acting as bystanders or spectators. While originally exclusive to the Wii, Miis would also see use in several Nintendo DS games, and later on the Nintendo 3DS and Wii U, with the latter two being made using the Mii Maker application pre-installed on the system.

While not playable, any Miis saved on the Wii console could be used as personal icons in the game's Friend Roster.

During E3 2014, when introducing the Mii Fighters, Sakurai claimed that Miis were considered as potential playable characters in Brawl, but were ultimately not included because "it didn't seem right at the time for Miis to be punching and kicking".[1] 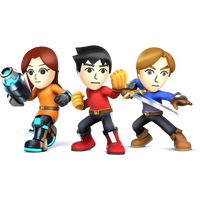 Miis, under the name of Mii Fighters, are customizable new playable fighters in Super Smash Bros. for Nintendo 3DS and Wii U. They can be one of three types: the Brawler, with its close-range fighting style, fast movement and powerful physical strikes, the Swordfighter, the weapons master, and the Gunner, which places emphasis on long-range attacks. Each of the three types have access to twelve unique special moves, and can also be customized with different outfits and accessories. Despite not originating from it, Mii Fighters are counted as a part of the Super Smash Bros. universe. The Mii Swordfighter and Mii Gunner are based off of Link and Samus. Possibly being semi-clones of these two fighters.

Miis can also appear in the background of several stages. In these cases, the Miis featured can either be those already on the console, or random Miis generated by the game.

Additionally, Mii Fighters appear as enemies (under the name "Fighting Mii Team") in the game's Multi-Man Mode, as well as the retooled Classic Mode. Succeeding the Fighting Alloys from Brawl, members of the team are taken from Miis in the player's Mii Maker, though randomly generated Miis are also present in the mode. All Miis featured as Mii Fighters are randomly chosen to be Brawlers, Gunners, or Swordfighters, but they cannot use special moves or grab ledges.

Mii Fighters have a unique costume when fought as part of the Fighting Mii Team, consisting of a black shirt with a large, white M on it, as well as stylised trousers featuring some stripes shaped like the lowercase letter I.

Miis are used as the players' tokens in the boardgame-like mode, Smash Tour, simply being used to move around between spaces and collect pick-ups. They appear to wear the same outfits that they do in the Mii Maker as opposed to their standard Mii Fighter uniforms, though they will not wear their favorite colors, and instead wear either red, blue, yellow, or green depending on which player or CPU they represent. The Miis that are automatically loaded as representatives for CPUs are chosen at random, and the chances of a Guest Mii being chosen depends on how many Miis have been created on the console in question.

This fighter is based on a player's Mii. It excels at fighting with punches and kicks. This type of Mii is very agile, blending attacks with movement to get the battle flowing. It has superior dash and jump compared to other types. Stay close and keep whaling on foes—you'll KO them in no time!

Shot Put is the only projectile attack a Mii Brawler can have. It drops quickly and only bounces a tiny bit. Try using it on foes hanging off an edge to knock them off. The down special Head-On Assault can bury enemies in the ground. It also sends the Mii Brawler downward—don't KO yourself, too!

This fighter is based on a player's Mii and favors a sword in battle. Enjoy the extra reach the sword offers, but remember that it takes a bit longer for strikes to reach your opponent as a result. Customize your Mii with chargeable moves, counters, or projectile attacks.

One of the Mii Swordfighter side specials actually uses a throwing disc called a chakram! How quickly you press your desired direction controls how fast and far the chakram flies and how much damage it does. Several other moves, like Skyward Slash Dash, also work in this manner.

A Mii sporting a blaster arm, this fighter is a great choice for those who prefer to fight the battle from a distance. The Mii Gunner has a lot of special projectile moves available, so pick your favorites and use them when needed. Don't forget about standard and smash attacks!

One of the Mii Gunner's side specials is Stealth Burst. The missile blends in, making it tough to see. Plus, you can control when it explodes, so it's handy for surprise attacks! You could also use Absorbing Vortex to absorb damage done to you by energy weapons. This is one fighter with a lot of tricks up its sleeve!

These weak fighters show up in droves in Multi-Man Smash. There are Brawler, Swordfighter, and Gunner types. Since they're based on the Mii characters saved on your Nintendo 3DS system or Wii U console, you could end up battling friends and family! Don't get soft—just take them out! Almost any attack does the trick.