Mewtwo is a a character with a vast potential for fast damage racking, with a solid moveset for both ground and air. Its Aerial Attacks are fast and spammable, Smash Attacks that are devastating, and very versatile Special Attacks.

Its Jab and Rapid Jab are very fast and powerful, being able to lock opponents and deal fast damage in little time. While its Tilts suffer a bit with lag, they cover great range, allowing him to safely poke opponents and interrupt approaches. Its Up and Down Tilts are notable for combo'ing with themselves.

Mewtwo's Aerial Attacks, on the other hand, are great for approaches due their low landing lag, being specially useful with short-hops. Up Aerial can combo with itself, as well with Up Tilt when fast falling. Neutral Aerial can also combo with itself, as well with most of Mewtwo's ground attacks when fast falling. Back Aerial and Forward Aerial are great gimping tools, while the later is potentially deadly with high KO potential. Down Aerial is a solid Meteor Smash and can be used as fast approach with short hops.

While its Throws are not so powerful in terms of KO (with its Back Throw being weaker than Zelda's), its Forward Throw is notable for having a huge range, with the shower of mini Shadow Balls being able to hit many opponents at once. Down Throw is also incredible for follow ups, being able to combo with many moves against low percentage enemies. In terms of knockback, Up Throw is Mewtwo's strongest throw.

Shadow Ball is one of the most powerful projectiles in the game. When fully charged it deals 25%, which is higher than Wii Fit Trainer's Sun Salutation combined with Deep Breathing, while the knockback is as powerful as Samus' Charge Shot and Lucario's Aura Sphere (at mid-high Aura Power). However, unlike in Melee, it no longer causes damage to nearby opponents while charging.

Confusion and Disable add versatility to its arsenal, making him able to deal with different kind of enemies. Confusion can be used to throw enemies off balance and reflect projectiles. Disable can cause very high stun against opponents at high percentages, however they must be at eye-contact with Mewtwo, meaning the move will not affect enemies with their back turned to Mewtwo.

Teleport blinks Mewtwo in the direction tilted. While it is not fast as Palutena's, it keeps Mewtwo's momentum after using, meaning it can grant additional range for recovery. Also, its air dodge functions the same way.

Despite receiving a weight buff from Melee, Mewtwo still is a mid-lightweight character, meaning that while he can KO opponents early, so can they. its size also makes him a very easy target, while its floatiness makes him easy to juggle, especially when facing fast characters like Sheik, Zero Suit Samus, Captain Falcon and Diddy Kong.

A good Mewtwo player must use its range in their favor and punish attacks accordingly. As many of Mewtwo's attacks have disjointed hitboxes, spacing is key.

Changes from Melee to Wii U/3DS

Being at the bottom of the Tier List in Melee, Mewtwo has received many buffs to speed, knockback and damage, as well as a few tweaks in some moves. Some of its animations are also different.

Also, its design has changed since Super Smash Bros. Melee to match its most recent appearances in the Pokémon games and even the Pokémon anime. Its head is smaller in proportion to its body, and it has a more defined build that makes it taller and vaguely humanoid.

Teleports out of nowhere, enveloped in dark energy, and slowly descends while floating until it reaches the ground.

Mewtwo puts its psychic powers to great use in this game. Not only it can float in midair, but its telekinesis gives its attacks extra reach and its throws added power. However, its light body is easy to launch, so if you're willing to take the risk of getting close, it might just be worthy!

Mewtwo's Final Smash starts as Mewtwo Mega Evolves into Mega Mewtwo Y. It then fires a huge psychic projectile that penetrates enemies and obstacles. This projectile doesn't do any damage, but it freezes every foe it hits in place. They can even be frozen midjump! Afterward, every foe hit with this projectile will take a powerful psychic hit to the head.

Mewtwo's Confusion Side Special not only lets you repel projectiles, it also reflects the damage back to your opponent. Its Down Special, Disable, stuns an enemy for longer the higher its damage is. As it works by Mewtwo glaring at his foe, this only works when they make eye contact. 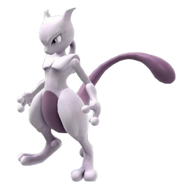 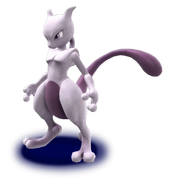 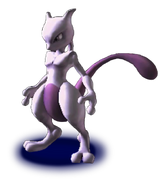 Mewtwo using his Down Smash on Ike. 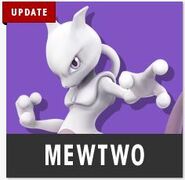 Mewtwo's amiibo figure shown at the San Diego Comic-Con.
Add a photo to this gallery

Retrieved from "https://supersmashbros.fandom.com/wiki/Mewtwo_(Super_Smash_Bros._for_Nintendo_3DS_and_Wii_U)?oldid=494887"
Community content is available under CC-BY-SA unless otherwise noted.