Mewtwo (Super Smash Bros. for Nintendo 3DS and Wii U)

Keiji Fujiwara
Mewtwo is a downloadable character for Super Smash Bros. for Nintendo 3DS and Wii U. It was confirmed in a Nintendo Direct on October 23, 2014. It was a part of the "Super Smash Bros. Offer" free DLC promotion obtainable by registering both the Wii U and 3DS versions of the game in Club Nintendo by March 31st 2015. For non-Club Nintendo Members, Mewtwo was released as paid DLC on April 28th, 2015 for £3.49 ($3.99) or for £4.49 ($4.99) on both games.

It currently ranks 10th on the tier list due to him having a strong projectile, amazing mobility, and a solid game both on the ground and in the air. However, it is the second lightest character in the game, meaning it can be KO'd early.

Mewtwo is defined as a Glass Cannon focused on Zoning. It has a huge amount of power and speed, however, it is the second lightest character in the game, as well being very "floaty" overall, with low air acceleration and slow falling speed, which makes it easy to juggle, especially when facing fast characters like Sheik, Zero Suit Samus, Captain Falcon and Diddy Kong. This, combined with his large frame, makes him an easy target and difficult at approach and landing. On the other hand, Mewtwo has a vast potential for fast damage racking, with a solid moveset for both ground and air. Its Aerial Attacks are fast and spammable, Smash Attacks that are devastating, and it has very versatile Special Attacks.

Mewtwo's ground game revolves on long range tilts and slow, but powerful Smash Attacks. His Jab is fast and can be cancelled quickly, allowing Mewtwo to connect into effective grab games. Its Down and Up Tilts are notable for combo'ing into themselves at low percentages, while can lead to other setups at mid-high percentages; Down Tilt also sends opponents on different angles depending on which part of its tail connects. Its Dash Attack has decent range and knockback, but suffers from high lag, being very punishable. Finally, its Smash Attacks are all very powerful, with large disjointed hitboxes.

Mewtwo's aerial game, on the other hand, is very potent and fast. Most of his Aerial Attacks deal decent damage, high knockback, and can often combo into themselves, while being fast enough for quick approaches due their low landing lag, being specially useful with short-hops. Neutral Aerial has a high number of active frames, enough to outlast airdodges, with trapping hitboxes that can set up opponents to many follow ups; it can also combo with itself, as well with most of Mewtwo's ground attacks when fast falling. Back Aerial and Forward Aerial are great gimping tools, while the later is potentially deadlier with higher KO potential and fast startup, being its strongest aerial. Up Aerial can combo with itself, as well with Up Tilt when fast falling. Down Aerial is a solid and somewhat fast Meteor Smash and can be used as fast approach with short hops, however, it is its slowest aerial.

Mewtwo's Throws are a combination of high damage and knockback, being some of the strongest in the game. His Forward Throw can deal very high damage, and is notable for having the highest range of all Forward Throws, with the shower of mini Shadow Balls being able to hit enemies close to Mewtwo. Its Up and Back Throw have high knockback growth, being some of the strongest in the game for KO'ing. Down Throw, while not leading to any true combos, can set up various mindgames and baits. However, Mewtwo's grab range is quite low with few active frames.

Mewtwo's Special Attacks have high utility, but are often risky to use like his ground game. Shadow Ball is one of the most powerful projectiles in the game. When fully charged it deals 25%, which is higher than Wii Fit Trainer's Sun Salutation combined with Deep Breathing, while the knockback is as powerful as Samus' Charge Shot and Lucario's Aura Sphere (at mid-high Aura Power). However, unlike in Melee, it no longer causes damage to nearby opponents while charging.

Confusion and Disable add versatility to its arsenal, making it able to deal with different kind of enemies. Confusion can be used to throw enemies off balance and reflect projectiles, having very high active frames. Disable can cause very high stun against opponents at high percentages, however, they must be at eye-contact with Mewtwo, meaning the move will not affect enemies with their back turned to it.

Teleport blinks Mewtwo in the direction tilted. While it is not fast as Palutena's Warp, it keeps Mewtwo's momentum after using, meaning it can grant additional range for recovery. Also, its air dodge functions the same way. When ledge-cancelled, it allows Mewtwo to quickly zip around the battlefield.

A good Mewtwo player must use its range in their favor and punish attacks accordingly. As many of Mewtwo's attacks have disjointed hitboxes, spacing is key.

Being at the bottom of the Tier List in Melee, Mewtwo has received many buffs to speed, knockback and damage, as well as a few tweaks in some moves. Many of its animations are also tweaked or different.

Also, its design has changed since Super Smash Bros. Melee to match its most recent appearances in the Pokémon games and even the Pokémon anime. Its head is smaller in proportion to its body, and it has a more defined build that makes it taller and vaguely humanoid.

Teleports out of nowhere, enveloped in dark energy, and slowly descends while floating until it reaches the ground.

Mewtwo isn't a very formidable fighter in Super Smash Bros tournaments, but for non-competitive it's a very good fighter to have unlocked. It's speed is good for dodging most attacks, although something like Bowser's grab-and-slam heavy attack is very effective against Mewtwo. Since it has a lightweight body, Mewtwo is prone to getting KO'd with little damage taken, if the attack used against it is powerful enough.

Mewtwo's Confusion side special not only repels projectiles—it also reflects the damage back on your opponent. Its down special, Disable, stuns an enemy for longer the higher its damage is. Disable only works on foes that are facing Mewtwo.

Mewtwo's Final Smash starts as Mewtwo Mega Evolves into Mega Mewtwo Y. It then fires a huge psychic projectile that penetrates enemies and obstacles. This projectile doesn't do any damage, but it freezes every foe it hits in place. They can even be frozen midjump! Afterward, every foe hit with this projectile will take a powerful psychic hit to the head. 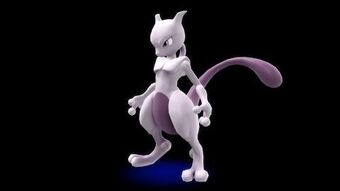 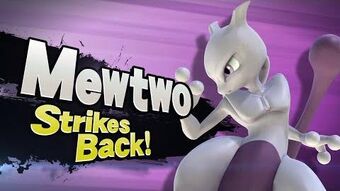 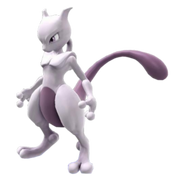 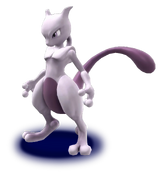 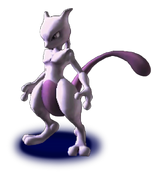 Mewtwo using its Down Smash on Ike. 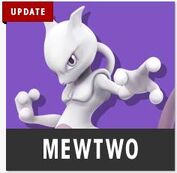 Notice that Ness is holding a Master Ball?!