This article is about Mewtwo's appearance in Super Smash Bros. Melee. For the Pokémon in other contexts, see Mewtwo.

Masachika Ichimura
Mewtwo (ミュウツー, Mewtwo) is an unlockable character in Super Smash Bros. Melee. It is one of eleven playable characters that can be unlocked in the game.

Mewtwo is ranked 21st on the current tier list mainly due to its poor attributes (slow movement speed, tall, floaty, light, tail hitbox). However, Mewtwo rose significantly (the highest rise in the tier list and the highest change in any Melee tier list, rising 6 places), due to techniques that have been developed over the last two years of competitive play, such as teleport mindgames, and its good ability to either combo or have great tech chasing after its down throw. It also has good recovery, powerful throws, good combos, and the third best wavedash in the game, falling shy of Luigi and the Ice Climbers. 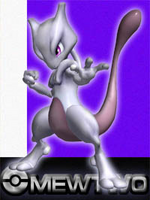 Mewtwo is a character with some powerful and versatile throws, as its Down Throw can chaingrab fast falling heavy characters like Captain Falcon, and its Forward Throw can deal double damage and knockback if done near a wall. In particular, its Up Throw and Back Throw can combo and KO quite well. Mewtwo is also known for having the fastest backward and forward rolls in the game, as well as covering the most ground. While this increases Mewtwo's defense, it still has mediocre defense due to being large, semi-light, having under average dash speed, and having the highest crouch in the game, which means Mewtwo can't duck under many attacks.

Mewtwo's Side Special Move, Confusion, can reflect incoming projectiles, but the reflected projectiles have their hitboxes removed. This means most projectiles won't harm the opponent they are reflected back at(unless the projectile has a secondary effect, like Link, Young Link and Peach's Bombs. However, confusion leaves Mewtwo open for attack from the opponent as the move takes longer to end than it takes the opponent to recovery and attack. . Mewtwo has very low traction. This allows Mewtwo to have a long wavedash, but it also hurts its approach. Mewtwo is the only character in the game whose Down Smash only hits one side, but its Up Smash hits both sides. Mewtwo has a fast and powerful Forward Aerial with combo and killing potential, but it also has mediocre reach. Mewtwo's projectile, Shadow Ball, is powerful. It does require charging to have power, but it damages opponents while charging if the opponent is close to Mewtwo.

Mewtwo's Up Special Move, Teleport, has decent range and passes through any attack, but it can't attack Mewtwo's opponent. Mewtwo has a Meteor Smash with its Down Aerial, which is its main KOing move. Mewtwo has fast tilts with combo capacity, can moonwalk, and its air dodge turns Mewtwo invisible, which makes it impossible to tell which direction Mewtwo is going in. On the downside, Mewtwo has a poor spot dodge. Mewtwo is one of the highest jumpers in the game and falls very slowly, which makes recovery easy with it, and its Teleport adds to the jumping distance. However, its slow descent speed can make it vulnerable in the air.

Fast fallers are the easiest characters to combo in the game. They include Fox, Falco, Captain Falcon, and (in some cases) Roy. A lot of combos carry over and work on most of the characters in this category. Here are some of the basic setups for these characters:

A Down Tilt can start up many combos at varying percentages against fast fallers. It combos into more Down Tilts and then into grabs. Usually after two Down Tilts Mewtwo can follow up with a grab at low percents. At high percents it can set up for Aerial Attacks.

An Up Tilt is an awkward but effective setup. It's generally used to interrupt an Aerial Attack, but it, like the Down Tilt, can combo into itself. It sets up nicely for Aerial Attacks.

Although mostly effective against Fox and Falco, this usually leads to juggles at low percents.

While never providing any "true" combos, this sets up for combos if the opponent Directional Influences incorrectly. If they DI towards the player, then they can grab them again, or begin a Down Tilt assault into a grab. If they DI properly, the player still has the option of tech chasing, something that Mewtwo is very capable of, due to its excellent wavedash.

The Mewtwo standard juggle for fast fallers, and the favorite move of many Mewtwo players. This sets up for multiple Forward Aerials at low percents and at least two at moderate percents. It also sets up for Up Aerials, or Tilts if performed close to the ground or after an instant DJC.

Another great juggling aerial. Often underrated due to Mewtwo's Forward Aerial, but in a lot of situations it's better. Combos into itself and other aerials with ease.

In addition to the normal trophy about Mewtwo as a character, there are two trophies about it as a fighter, unlocked by completing the Adventure and All-Star modes respectively with Mewtwo on any difficulty.

Mewtwo (Smash Red)
As Mewtwo relies mostly on its powerful brain, there are times when it scarcely uses its arms and legs. Since Mewtwo spends much of its time floating, it flies far when struck. Shadow Ball traces a jagged path once released: the longer Mewtwo holds it, the more powerful it becomes. Mewtwo uses Confusion to spin its foes around.

Mewtwo (Smash Blue)
Mewtwo is definitely not a speedy character, but its ESP-powered grab and throw moves are comparatively strong. Teleport has a short range, but doesn't leave it open to attack. It's best used as an escape move during disturbances. Mewtwo can daze a foe if it makes eye contact and uses Disable; the move is useless unless Mewtwo is facing its enemy.

Retrieved from "https://supersmashbros.fandom.com/wiki/Mewtwo_(Super_Smash_Bros._Melee)?oldid=564741"
Community content is available under CC-BY-SA unless otherwise noted.