Though Mumkhar did not appear physically, he makes an appearance in Super Smash Bros. for Wii U riding inside Metal Face. He appears as a boss in the Gaur Plain stage. He will attack fighters during the night form of that stage and give commentary. Metal Face can also destroy parts of the stage as well. He can be defeated by attacking him, and when that happens, he will burst into a series of explosions and fall to the bottom of the stage, dealing heavy damage and knockback to any fighters in range who didn't land the final hit on him. If he is not defeated before dawn, he will leave the stage, sometimes with a “parting gift” in the form of a dashing slash along the horizontal length of the stage. He is also featured as a trophy on the Wii U version. If Shulk is on the stage when he shows up, Metal Face will taunt him.

As a stage hazard

Metal Face reprises his role as a stage hazard at Gaur Plain.

Metal Face also appears as a Legend-class Attack Type Primary Spirit. It can be obtained by enhancing the Mumkhar spirit at Level 99.

Metal Face (right) in trophy form along with Melia and Reyn in a Photo Studio screenshot. 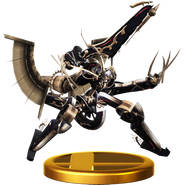 Metal Face’s trophy in For Wii U