The Metal Blade (メタルブレード, Metaru Burēdo?) is Mega Man's Standard Special Move. It is a circular blade with a hole in the middle of it that can be thrown in eight directions.

The Metal Blade can be thrown into the ground, allowing Mega Man and other characters to pick up and use it as an item. When thrown it can be caught by the opposing character and thrown at Mega Man or other players. It causes 3% damage per hit, usually hitting a target twice, and its damage increases to 5% when used as an item. Only one of the user's Metal Blade can be present at a time.

It can be customized into the Shadow Blade or Hyper Bomb. 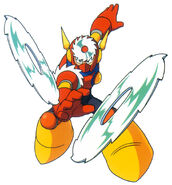 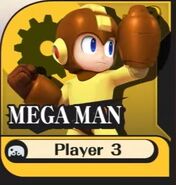 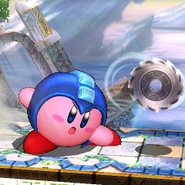 Kirby copying Metal Blade.
Add a photo to this gallery
Retrieved from "https://supersmashbros.fandom.com/wiki/Metal_Blade?oldid=530311"
Community content is available under CC-BY-SA unless otherwise noted.