Metagross appears in Super Smash Bros. Brawl as a Poké Ball Pokémon and uses Hammer Arm, which has effects similar to Venusaur's Earthquake. When summoned, it slams its arm into the ground. Any opponent caught in the shockwave is buried in the ground and takes heavy damage. It struggles to grab the claw back out of the ground, before slamming another in. It repeats this several times. The attack does not harm the user.

If Metagross is summoned on a soft platform, it will fall through it.

If Metagross is summoned in a small space equivalent to the area of a normal sized block from stage builder, it doesn't move normally. Instead, it simply vibrates vertically [1].

An Iron Leg Pokémon. When two Beldum combine, they evolve into a Metang. In the same way, a Metagross is the result of two Metang combining. It's said to have intelligence that can match a supercomputer. Though it weighs 1,212.5 pounds, it is somehow able to fold up its legs and float.

Metagross retains its slamming arms, with no notable differences in the attack.

A hulking Steel/Psychic-type Pokemon, Metagross weighs in at around 1,212.5 lb. Even Snorlax isn't that heavy! It uses Earthquake by stomping its powerful legs on the ground, sending nearby fighters flying and burying those who come too close. You'll be safe in the air, so use careful timing to stay that way.

Metagross, as it appears in SSB4. 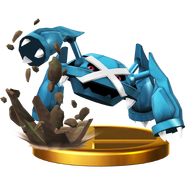 Add a photo to this gallery
Retrieved from "https://supersmashbros.fandom.com/wiki/Metagross?oldid=547401"
Community content is available under CC-BY-SA unless otherwise noted.