This article is about Meta Knight's appearance in Super Smash Bros. for Nintendo 3DS/Wii U. For other uses, see Meta Knight.

Atsushi Kisaichi
Meta Knight (メタナイト, Meta Knight) is a starter veteran in Super Smash Bros. for Nintendo 3DS and Wii U from the Kirby universe. He was confirmed on August 13, 2014 in an official Miiverse post, though he was hinted at two days earlier in another Miiverse post.

He currently ranks 16th on the tier list, placing him in the B tier. While still a high ranking, it falls well short of his placement in Brawl, where he received his own tier. His strong attacks have been buffed to give him greater KO potential, and he retains many of his rapid attacks, but his recoveries have been nerfed and most of his attacks now have higher ending lag.

Meta Knight is a very mobile, combo oriented character that benefits mostly from Bait & Punish tactics. His balanced attributes allows him to quickly adapt to different fighting styles, allowing him to play offensively or defensively as the situation demands.

Meta Knight's greatest assets, much like Sheik, are his great frame data and very high combo potential. Most of his attacks have low ending and landing lag, meaning he can quickly chain combos from ground to air and vice versa. He is also the only small character that wields a sword, giving him a powerful neutral game, specially given the low lag of his attacks, something quite unusual for swordsmen in general.

His ground game is solid and very fast, with Neutral Attack being an efficient damage racking due being one of the fastest in the game, while Forward Tilt allows him to quickly send his opponents into the air. Down Tilt, on the other hand, can trip opponents, is an efficient poking tool and also excellent for spacing, while his Up Tilt can be useful to initiate juggle setups, comboing with itself at low percentages. His Dash Attack is also useful to start juggles, and covers a decent range.

Meta Knight's Smash Attacks are notable for their safety and speed, and unusual combination that often gives him the upper hand. Forward Smash is fast and has surprisingly low ending lag, being useful for spacing, and is his strongest KO move. Up Smash, while not so powerful, is great for damage racking and can combo out of an Up Tilt at low percentages. Finally, Down Smash Attack is his fastest Smash Attack, being a quick sweep move that is very useful to punish rolls and to edge-guard.

In the air, Meta Knight is as effective as on the ground, boasting from high speed and combo potential. Neutral Aerial is a decent Sex Kick, although it has the lowest range of all his aerials. His Forward and Back Aerials can trap opponents easily between hits, while the latter can even pull down enemies into the hits, being useful for stage spikes and jab lock resets. Up Aerial is his main juggling tool, being his fastest aerial, capable of various setups that can often score ceiling KOs. Down Air Attack, while not being a Meteor Smash, is one of the fastest Down Aerials in the game, as it is a safe move as it covers a wide are below Meta Knight.

Meta Knight's Throws are very versatile, with Forward and Down Throws being his main tools for juggle setups. Back Throw is useful for getting opponents offstage, while Up Throw can KO at very high percentages, and even earlier if it hits a high platform, like the top one in Battlefield.

Finally, Meta Knight has one of the best recoveries in the game, boasting from five midair jumps and Special Moves that can further aid it. In addition, they are all very useful both for offense and defense. Mach Tornado is very fast, capable of easily trapping opponents between hits, allowing Meta Knight to rack up damage fast; if all hits connect, he will deal roughly 22% damage total. Drill Rush covers good range and his high priority, and Meta Knight can change his trajectory while spinning. Dimensional Cape allows him to teleport a short distance, which and be controlled by the control stick; if the button is pressed again, Meta Knight will unleash a powerful vertical slash that can KO opponents at 100% near the ledge. Finally Shutter Loop is a quick upwards rising slash that is Meta Knight's main finisher for his juggle setups; if not stalled, this move can KO opponents as earlier as 60% near the upper blast zone.

However, Meta Knight has significant flaws that can be exploited. He lacks a projectile and often cannot deal well against opponents that excel at using them, holding him back from using the fullest of his neutral game. He is also very dependent on edge-guarding to KO properly, with his strongest attacks being either slower than normal or being highly punishable. In addition, none of his throws pack KO power, with even his Up Throw only KO'ing reliably when hitting higher platforms. Also his juggle setups are difficult to pull off consistently due DI. Finally despite his small size, he still has an unusual large hurtbox, which combined with his high falling speed and weight makes him very susceptible to combos.

Meta Knight players must often play more defensively to make full use of his quick arsenal that can punish mistakes easily, leading into a flurry of combos that leave opponents with little time to react. His gameplay style requires precision and patient, specially when dealing with other defensive character, specially camping ones.

Due being the highest tier character in Brawl, to the point of being considered "broken" and even banned in some tournaments, Meta Knight received a couple of both nerfs and buffs to balance him with the other characters.

Kirby's mysterious rival, this masked swordsman appears in several Kirby games. His cape transforms into wings to grant him flight. In Smash Bros., his quick sword skills and aerial agility set him apart. He can jump up to six times in a row, and he has a special move to soar higher.

Meta Knight's Dimensional Cape lets you teleport, changing where you'll reappear with directional inputs and attacking by holding the button! His Mach Tornado special can draw in and attack multiple opponents. Rise by pressing the button repeatedly, and press left or right to move. 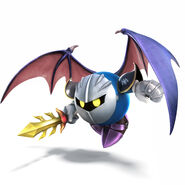 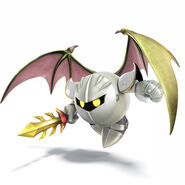 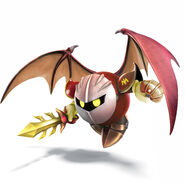 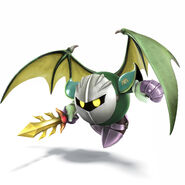 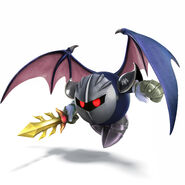 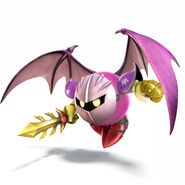 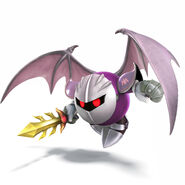 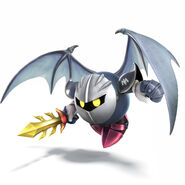 Meta Knight alongside with Marth and Ike. 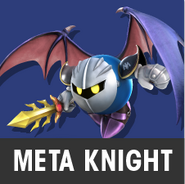 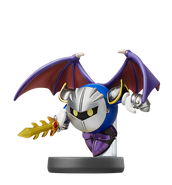 Meta Knight amiibo figure.
Add a photo to this gallery

Retrieved from "https://supersmashbros.fandom.com/wiki/Meta_Knight_(Super_Smash_Bros._for_Nintendo_3DS_and_Wii_U)?oldid=571279"
Community content is available under CC-BY-SA unless otherwise noted.