This article is about Meta Knight's appearance in Super Smash Bros. Ultimate. For other uses, see Meta Knight.

When unlocked, he is fought at Halberd. 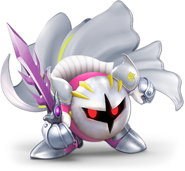 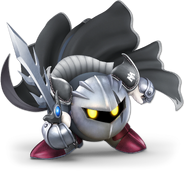 Meta Knight with a Beam Sword while fighting Toon Link on Kongo Jungle.

Meta Knight on Marx's boss field.
Add a photo to this gallery