This article is about Meta Knight's appearance in Super Smash Bros. Brawl. For other uses, see Meta Knight.

Meta Knight (メタナイト, Meta Knight) is a starting newcomer in Super Smash Bros. Brawl from the Kirby universe. He was the very first newcomer announced at E3 2006.

He currently ranks 1st on the tier list. Meta Knight has extremely fast attack speed, unpredictable recovery thanks to four recovery moves and five midair jumps and amazing edge-guarding ability. However, he has poor KO potential and endurance, though his fast attacks and superior mobility more than compensate for his weaknesses.

Meta Knight is a small character, being roughly the same size and shape as Kirby (although Meta Knight has a cape that transforms into a pair of bat-like wings) and with the same weight as Pikachu. With proper Directional Influence and partial Momentum Canceling, he can be hard to KO, despite his light weight. Meta Knight's small size and low weight mean that he is difficult to chaingrab, but a few characters can chaingrab or grab release combo him because of his poor, short air release (the third worst behind Wario and Squirtle when including small characters). Because of his poor air release, it is possible for him to be meteor smashed by Marth's tipper or Falco's Phantasm, which is never used off stage. Meta Knight's dash speed and rolls are quite fast (he has the fastest shield roll in the game), but his lateral aerial movement outside of a glide or any special move is very poor (in the bottom 5).

His wings provide Meta Knight with five mid-air jumps and the ability to glide twice (by pressing and holding the jump button and then using his Up special or with the Wii remote, by repeatedly tapping left and right). His moveset is mostly comprised of fast, long-ranged moves with his sword Galaxia, which deal relatively low damage and knockback. He lacks early kill moves heavily depending on WoP for early kills (which can be hard to pull off due to his poor air-speed). The low power is compensated for by the fast speed and minimal lag of most of the attacks, allowing Meta Knight to easily set up combos and rack up damage, not to mention that only his dash attack does not have transcending priority. In particular, his Mach Tornado (neutral special) can quickly put up to 26% damage on the opponent. Another example can be seen in his Up Aerial, which when combined with his multiple jumps can combo into itself to 30% or more damage and/or other moves because of its speed.

Many of Meta Knight's multi-hit attacks (such as Forward and Back Aerials, Forward Tilt, Up Smash, and Mach Tornado) are useful in racking up damage, but can all be escaped with Smash DI. Meta Knight's knockback comes from his forward smash, glide attack, and his up special. These moves are his only viable finishers, and none of them are meteor smashes. Additionally, the up special puts Meta Knight into a helpless state, leaving him vulnerable to being attacked. Meta Knight is one of only two characters, the other being Sonic, whose all special moves can be used for recovery (allowing him an unpredictable recovery and therefore making him nearly impossible to edgeguard) and put him into a helpless state.

Meta Knight does lack a projectile, but Mach Tornado has high enough priority to break most opponents' projectiles, or he can just glide over them. Other abilities of Meta Knight include his ability to use his Dimensional Cape for mind games, and having two excellent approach attacks: Mach Tornado and Drill Rush, giving him a very unpredictable approach game. Meta Knight's Final Smash, Galaxia Darkness, is easy to land, has a powerful knock back and will hit your partner if you're playing team. It goes through shields dealing 40% damage and 14% for players that did not get hit by his cape.

Both his Side and Down Taunts provoke battle. This is because he would always challenge Kirby to an honorable fight.

It is revealed that before the events of the Subspace Emissary, Meta Knight was attacked by the Subspace Army, who had the intent of taking the Halberd. He was able to hold them off until King Dedede attacked him, causing him to lose his ship.

When Meta Knight is first featured in the Subspace Emissary, he attacks a lone Marth outside of a large castle. He quickly learns that Marth is not his enemy when they are both almost piled on and surrounded by Primids. After a successful battle, both warriors chase the Ancient Minister, who is carrying a Subspace bomb. Both are unsuccessful in their attempts in destroying the bomb (Meta Knight's left wing was shot by the Ancient Minister's laser, forcing him to land and change to his cape to extinguish the flame); luckily, Ike appears and uses his Aether to catch the Minister off guard and destroy the bomb. With the bomb destroyed, all three head back to the castle to clear out any remaining Primids.

Later, they are all seen traveling the wastelands together and battling Galleom. Meta Knight then saves Lucas and an unconscious Pokémon Trainer from a giant free-fall after they defeat the same boss. Meta Knight then begins to ascend a large cliff face, followed by the Ice Climbers (who see his ascent as a racing challenge), in order to reach the Battleship Halberd. At the summit, Lucario challenges Meta Knight to a sparring duel. To the relief of the Ice Climbers, the winner revives the loser, having no hostile feelings. The Halberd then crashes into the side of the mountain in an attempt to destroy the defeated Great Fox, which is being held by the arm of the Combo Cannon. Meta Knight and Lucario quickly board the Halberd, while the Ice climbers fall off the summit, into the canyon.

The pair run into Solid Snake while on board and join forces with him to take back the Halberd. After rescuing Peach and Zelda, the trio continues on to the control deck. There they discover that the ship is being piloted by a gang of Shadow Bug Mr. Game & Watches. Snake runs towards them and throws them all out of the window and onto the bridge, who fuse together to form a gigantic metallic monster called Duon. Once Duon is defeated, Mr. Game & Watch joins the group, along with Peach, Zelda, Fox, and Falco. (Meta Knight remains in the Halberd's control center and does not take part in the battle.)

Meta Knight takes back control of the Halberd and reunites with the members from other groups. The aircraft of the other heroes is placed inside the Halberd, which heads towards the Subspace Gunship with all of the Super Smash Bros heroes on board (except for Wolf, Toon Link, Jigglypuff, Sonic, Ness, King Dedede and Luigi). After using the Subspace Battleship's main cannon to create another Subspace portal, Ganondorf spots the Halberd on the horizon and orders the battleship to open fire. The Halberd is struck down, but the heroes are able to escape on board Samus's Gunship, Captain Falcon's Falcon Flyer, Olimar's Hocotate ship, and Falco's Arwing. Kirby destroys the Subspace Battleship by slicing through it is with the Dragoon racing machine and the heroes enter Subspace to pursue Ganondorf and Bowser.

Meta Knight is turned into a trophy by Tabuu along with the rest of the Super Smash Bros heroes upon their entrance into Subspace. He is later revived by Kirby. He rejoins the others in the fight against Tabuu.

The following stickers can be used only by Meta Knight or by a select few including him:

Meta Knight and Pit being hit by Zero Laser

Meta Knight in the Brawl intro 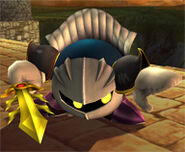 Meta Knight on Bridge of Eldin 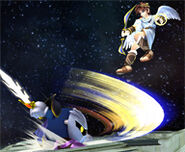 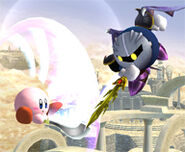 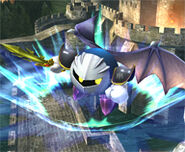 Meta Knight's stock icon
Add a photo to this gallery

Retrieved from "https://supersmashbros.fandom.com/wiki/Meta_Knight_(Super_Smash_Bros._Brawl)?oldid=591797"
Community content is available under CC-BY-SA unless otherwise noted.