Atsushi Kisaichi
Meta Knight (メタナイト, Meta Naito?) is a character and the main deuteragonist from the Kirby universe, and is often seen as Kirby's rival or occasionally ally. He is often portrayed as a "friend or foe" type of character, as in his debut game, Kirby's Adventure, he will give Kirby an Invincibility Candy in some levels and send his Meta-Knights to fight him in other levels. He later served an antagonistic role in Revenge of Meta Knight in Kirby Super Star, but in games since he has primarily assisted Kirby in his adventures.

Meta Knight is a major character and the main deuteragonist in the Kirby video game series developed by HAL Laboratory. Kirby's Adventure was his first appearance, although Meta Knight was not given a name until Kirby's Avalanche, released in 1995. He is a mysterious character and is seen as both a hero and a villain in the series. In Kirby's Return to Dream Land, he partnered Kirby along with King Dedede and Bandana Dee. Meta Knight is a mysterious character who has been depicted as both a hero and a villain, and more generally an anti-hero, in the Kirby series. He is sometimes cast as an antagonist to Kirby, but his intentions are not generally portrayed as definitively evil. In certain instances, he sends his troops, the Meta-Knights, as enemies against the pink protagonist as a sort of training. Titles such as Kirby & The Amazing Mirror, Kirby's Return to Dream Land, and Kirby: Planet Robobot depict Meta Knight as a direct ally to Kirby, often assisting him in his journey.

Meta Knight's mask breaks almost every time Kirby defeats him in a boss battle, revealing a Kirby-like face underneath. The only difference is that Meta Knight's facial features are pure white and his face is dark blue, there have been rumors that he is the same species as Kirby. His mask gives the wearer's eyes a yellow-ish tint; it makes Meta Knight's white eyes yellow and Kirby's blue eyes green, as revealed by various Kirby games.

Meta Knight also wears a cape that can turn into wings, which he uses to fly and glide around. However, in Kirby's Return to Dream Land, Meta Knight's wings are under his cape. On certain occasions, he will take off his cape in battle.

In battle, Meta Knight has a notable code of honor. He always provides a sword to Kirby in order to have an equal duel; in some games, such as Kirby Super Star and Kirby Star Allies, there may be certain circumstances that cause him to make the first move when Kirby takes too long to get the weapon. However, in contrast to his code of honor, Meta Knight is also occasionally shown to be forceful and arrogant. This is best demonstrated in the "Revenge of Meta Knight" mode of Kirby Super Star, where Meta Knight attempts to use his battleship, the Halberd, to take control of Dream Land and end its carefree lifestyle.

The Kirby: Right Back at Ya! anime depicts Meta Knight as an ostensible underling to King Dedede; in reality, he has his own higher motives, and only uses his relationship with Dedede as a means of accomplishing them. He often acts as a mentor to Kirby, providing cryptic advice and training him to become a Star Warrior. This appearance is the basis of Meta Knight's personality in Smash. In Japanese, he is even voiced by the same actor, Atsushi Kisa'ichi.

Meta Knight's only cameo appearance in this game is as a collectible trophy, unlocked as one of the 250+ trophies that can be collected randomly during normal play, such as in the Trophy Lottery and throughout the various Single-player Regular Matches (though it will only be available to start appearing after the player has played over 200 Vs mode matches). The trophy has two factual errors: The first is that the trophy is called "Meta-Knight", but his name is not supposed to have a hyphen in it, and the second is that his first appearance was in Kirby's Adventure in May 1993, not Kirby Super Star in September 1996. The trophy reads as follows:

Meta Knight
The mysterious head of the Meta-Knights, he wields his sword with dignity. He delivered his sword to Kirby and demanded single combat in show of his knightly honor; his strict adherence to his code of ethics makes him a rarity in Dream Land. Sometimes he throws off his cape in battle. It occasionally transforms into wings. 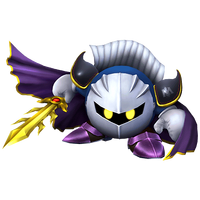 Meta Knight is a newcomer in Super Smash Bros. Brawl and he is available to play from the start. Almost all of his attacks involve his sword, Galaxia, and most of these attacks are extremely fast, such as his Up Aerial, which comes out in just two frames (2/60 of a second), referencing his swordsmanship in the Kirby franchise. He has medium range due to the fact the his sword is not very long. All his specials put him into helpless state, but they can also be used in recovery. Like Kirby, King Dedede, Jigglypuff, Charizard and Pit, he has multiple jumps, but, despite physically resembling Kirby, he doesn't puff himself up to jump. Instead he uses his wings to propel himself upwards, making him more similar to Pit and Charizard in that respect. Also like Pit and Charizard, Meta Knight has the ability to glide using his wings.

Meta Knight is widely considered to be the best character in the game if one has mastered his controls due to his lack of disadvantageous match-ups (although some match-ups are considered to be approximately even) along with his overwhelming dominance in tournaments. Due to being considered broken, Meta Knight has been banned since January 9, 2012, on the Unity Ruleset and has been the only character in the Smash series to be banned in standard tournaments. However, after the disbandment of the Unity ruleset, prohibiting him is up to the Tournament Organizer.

Meta Knight
The head of the Meta-Knights, and something of a rival to Kirby. He's quite an accomplished swordsman. Following his code of knightly ethics, he once delivered his sword to Kirby and demanded single combat. His giant cape transforms into wings, giving him the power of flight. He's shown his face briefly before, but his relationship to Kirby is still a mystery. 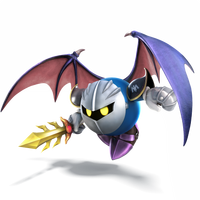 Due to his dominance in Brawl, Meta Knight has been significantly nerfed from Brawl to 3DS/Wii U. Many of his attacks are slightly slower along with no longer having transcendent priority and his range has been noticeably shortened, forcing him to take a more aggressive play style. His recovery options has also been toned down as he can no longer glide and Mach Tornado carries less momentum and lost is ability to ledge sweetspot.

Despite receiving several nerfs, Meta Knight has been given a few notable buffs. His air speed has been increased, now being slightly below-average, and most of his attacks deal more damage. Additionally, Shuttle Loop has been reworked as it now quickly ascends Meta Knight into the air performing a two-hitting attack, making it a stronger vertical finisher along with aiding his vertical recovery. Meta Knight is currently ranked 16th on the tier list, placing him in the B tier. Meta Knight still has numerous strengths, such as his combos from Brawl, and his deadly edge-guarding game. He has received several buffs to his KO moves as well, with his forward smash and back aerial now dealing more knockback, and Shuttle Loop deals more damage, has increased range and much higher knockback scaling. As a result, he has a powerful punishing ability. Most importantly, his air speed has been greatly increased, now being roughly average, whereas it was tied for the third slowest in Brawl. Even with the loss of many of his advantages, his strengths heavily outweigh his flaws; this has translated to his tournament status, in which he has secured strong representation and noteworthy results.

Meta Knight
Kirby's mysterious rival, this masked swordsman appears in several Kirby games. His cape transforms into wings to grant him flight. In Smash Bros., his quick sword skills and aerial agility set him apart. He can jump up to five times in a row, and he has a special move to soar higher.

Meta Knight (Alt.)
Meta Knight's Dimensional Cape lets you teleport, changing where you'll reappear with directional inputs and attacking by holding the button! His Mach Tornado special can draw in and attack multiple opponents. Rise by pressing the button repeatedly, and press left or right to move.

Meta Knight returns as a playable fighter, as with all previous characters, in Super Smash Bros. Ultimate, now as an unlockable character. Meta Knight has received a mix of buffs and nerfs in the transition to Ultimate, but has been nerfed overall, albeit significantly less so than in his transition from Brawl to Smash 4, his Mach Tornado now only hits once. He also received a new Final Smash in the form of Darkness Illusion.