Please report vandalism here, with a link to the vandals contributions and pages vandalised. I will take action as soon as possible. Miles (talk) 20:58, 3 May 2009 (UTC)

Anonymous Fan has become a real pest, and is making unfulfillable threats now. Get out your banhammers.L33t Silvie Your epidermis is showing. 22:08, 5 May 2009 (UTC)

No, it doesn't. If you ever have doubts as to whether or not a person's actions count as vandalism, the answer is 99% of the time going to be no. In cases like these, assume that the editor didn't know that he was supposed to use the talkpage or the forums or whatever. Unless they make so many edits like that that it's clear they're just doing it to disrupt RC and etc, treat them like any other user who made a simple mistake. --Shadowcrest 19:50, 14 May 2009 (UTC)

Important or not Edit

More so a slight error, but your name doesn't show up in green in the history of a page. All the other admins do, so I guess you're not in the commons or whichever mediawiki script it is.Smoreking(T) (c) 13:17, 10 May 2009 (UTC)

I wanted to apologise for always trying to upload the same image over and over again on my page. I thought fan art was allowed her, but I looked at the guidelines and I found out it wasn't. Sorry again for being a pain in your butt! --Twilightwizard0309 (talk) 21:09, 15 May 2009 (UTC)

Since you know/care about the Smash Arena, fix the glaring yav violation that is the discrimination of IPs when you get the chance please. --Shadowcrest 02:29, 20 May 2009 (UTC)

I can't find anything about Samus's Charge Cancel. I know enough about it to add the info to wherever it needs to be added myself. Basically, you can cancel the charging animation of the Charge Shot with a shield, then quickly jump out of the shield and do anything you could normally do in the air (aerials, zair, etc.). Only problem is, I don't know where to add it...an article for itself in the Techniques category, a note on the Charge Shot article, a note on the Samus (SSBB) page, or something else? This is a pretty important part of Samus's metagame. I'd also like to add something about the Spider Ball, where one can run off the ledge, drop a bomb, and use the hop to actually roll back up the ledge. Can be used for an easy spike setup. Thanks. Shade487z 13:39, 27 May 2009 (UTC)

hey, Miles, how do you do a vertical page break? by that I mean so that you can have two parallel lists, both centred on their half of the page. If you could give me the basic coding it would be much appreciated. Thanks, PenguinofDeath 20:12, 29 May 2009 (UTC)

I don't know how to make a table... It's just for my Userpage, but it's also general interest as table-making skills could come in useful. I tried copying tables from other pages and just fiddling about with them to get what I wanted, but nothing seemed to produce two columns. The generic "two column table" code would be great. Thanks, PenguinofDeath 22:26, 29 May 2009 (UTC)

I know I've already said it, but thank you. Not just for this but also for your support of my RfR. About that, how long does the voting process last? PenguinofDeath 05:49, 30 May 2009 (UTC)

Hey. It's me, Jughead87. I apologize for not replying to your message sooner. I am considering moving from my Wiki user page to here and joining SmashWiki; though, it's partly because I need a new home for my content currently posted on my Wiki user page. Would this space be appropriate for that? 66.27.66.126 05:26, 11 July 2009 (UTC)

Thank you. I don't think I'll have much time to contribute here because I've already got other responsibities. Right now, I'm having difficulties trying to create an account because the site will not accept Jughead87 or any other username as valid. 66.27.66.126 04:31, 12 July 2009 (UTC)

What kind of "not accepting" is this? Maybe your IP is caught in a vandal's blanket block? Toomai Glittershine

I don't think it'll work as a subcat- if the notability category is listed as a subcategory, then the CfDs includes it as a page that needs to be deleted. A link is probably the best we can do to get it listed as a "subcategory" of sorts. Shadowcrest 03:11, 15 July 2009 (UTC)

Did you just move short hop to small jump? Edit

Pardon me, but you moved short hop to small jump, didn't you? Correct me if I'm wrong, but isn't that kind of against SW:NOTOFFICAL? I'm no SmashBoards frequenter, but I wouldn't believe that most of the community decided to make "small jump" the more commonly used term. Toomai Glittershine

Having authored Smash Wiki is not Official, I'm in full concurrence with Toomai here. I've never heard small jump, and if I mentioned it to any Smash Bros. player I know, they'd just be like, "what the hell is that, a short hop?" Clarinet Hawk (talk · contributions) 02:14, 20 July 2009 (UTC)

Yeah, I saw an old post on C Hawk's page and I wasn't really reading the hold conversation, but you just have to ask uberfuzzy to take away the "message anon" thing and it won't clog the recent changes. Kperfekt BURN!!! Revert That! 18:12, 28 July 2009 (UTC)

So, about Smash Arena... Edit

In case you haven't noticed, I've taken over the empty Smash Arena. But I'm a bit dry on how to pick out the best suggestions. And the three fights that are currently "queued" make pretty much no sense. A little help? Toomai Glittershine

For now I'd say do Snake v. Sonic next. I'm sorry for leaving that job, but it was pretty boring for me after a while. Thanks for keeping it alive. As for the queued list, feel free to ignore it and pick fights that sound interesting to you. Miles (talk) 19:09, 13 August 2009 (UTC)

Which of these images would be best for the SLAPAYO page? 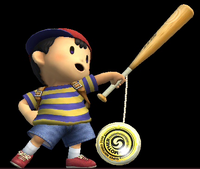 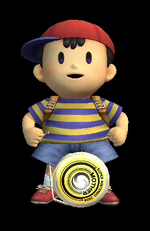 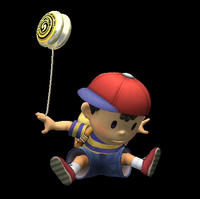 I like the first one better. It makes the glitch stand out by using a taunt, and it's not as "jumbled" as the middle one. Toomai Glittershine

Hello, again. I was just wondering. I don't wanna make any articles that are useless like the one that I did, but could you guys maybe give me some kind of idea as to what I CAN make? Or maybe edit an article that, well, needs editing? Is there anything that this wiki needs that it doesn't yet have? Because if yes, I'd like to help out. (oh, and sorry about all these questions).--68.207.113.17 12:57, 23 August 2009 (UTC)

It's no problem that you're asking questions, in fact it shows that you're committed to improving the wiki, which is great. I'd start by suggesting you get a username. After that, you could work on minor style edits anywhere on the wiki (always the popular random editing) or else try and find gaps in our content to fill. Thanks for taking an active interest! Miles (talk) 15:48, 23 August 2009 (UTC)

what's going on? i'm trying to edit a page by inserting a photo, like i usually do, but the photo button isn't their anymore. in fact, the whole bar isn't even there. can someone please help me? is there a button i accidently pushed? what?--Blablob (talk) 21:55, 23 August 2009 (UTC)

I may be leaving Edit

well, it may be that this wiki is absolutely huge and great, and how i wish i could help out, it seems i just don't understand the concept of a wiki. it's a lot of work, obviously, that you guys put into it, but maybe a wiki isn't my thing. i've created 2 articles recently, both of which have been deleted. i created my own wiki "super smash bros. revolution wiki" which no one has even visited, not even once. these are for reasons i do not understand, and thus, i may just stop coming to this website. the reason i'm telling you guys this is because i'm hoping someone can help me, you know, change my mind. as you can tell, i'm very bad at handling stuff like this, but i ask that you help.--Blablob (talk) 02:14, 24 August 2009 (UTC)

Well, the goal of this wiki is to provide an encyclopedia of Smash knowledge as it applies to its games, and anything you can do to help that would be appreciated. Miles (talk) 19:32, 24 August 2009 (UTC)

Well, i figure i may as well say it. for about a month now, i've been working on my own fan-wiki titled "super smash bros. wiki". the link to it is smash4ideas.wikia.com. i know it ignores a lot of the stuff you have (Miles) told me about in the past, such as the concept of a wiki. regardless, i am the founder of that wiki, and while it is very different and smaller than yours, i will update it reguraly. i am telling you this because, rather than keep messing around with your wiki, i think i'll just stick to editing mine. please visit this wiki and let me know what you think. please reply soon.--Blablob (talk) 00:17, 25 August 2009 (UTC)

Um, did anyone listen to what i said? i'm not trying to be mean here, so please don't get offensive. but could someone visit my wiki and let me know what they think? i know this isn't the place to put stuff like this, only reason i do is to get ahold of people like miles. i'm really sorry, but i'm about done on this wiki.--Blablob (talk) 00:26, 26 August 2009 (UTC)

Retrieved from "https://supersmashbros.fandom.com/wiki/Message_Wall:Miles.oppenheimer/Archive8"
Community content is available under CC-BY-SA unless otherwise noted.